I'm very pleased with today's CAT TREAT:   LJ Charles and her handsome cat Oliver Biscuit. You all know how partial I am to black cats and this one is clearly special. I love the little bell.  Take it away my friends.
Oliver Biscuit came into our lives one snowy day in March. The air was crisp and filled with a gentle dusting of feathery flakes that melted as they touched the ground. 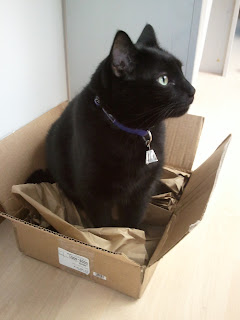 The Hubby and I shrugged into winter coats, scarves, and gloves for the trip to the humane society. We often dropped off newspapers and plastic bags so the personnel knew us and let us wander about searching through Kitty City for the perfect addition to our family, and playing with the kittens. It wasn’t until we were ready to leave that my husband peeked into the quarantine area—where they isolate newcomers until they’ve been vetted healthy.
He spotted Oliver and marched right up to kennel. After spending a few minutes petting him through the openings in the door, we inquired about his history. He’d been deserted at the Air Base. Often we have military personnel who try and find homes for their animals before they’re shipped overseas, but occasionally the shelter is too full and there’s no one on base who can take in another animal. There’s nothing they can do be leave the animal to fend for itself. I believe the Base security personnel try to collect these animals and bring them to the humane society whenever they can.
He’d been in isolation for six days so they let us spend some time with him in the adoption room. He curled up on our laps, it didn’t matter which of us held him, and purred like a truck with holes in the muffler. We immediately wanted to rescue this sweet, sweet boy, so what could we do but apply for adoption?
The Biscuit Kitty is black with green eyes, and two secret white spots on his belly—just wisps of white, barely visible, like big, fluffy snowflakes had landed on his tummy. I glanced out the window and smiled. There was no question the Fates had stepped in with the perfect kitty for us.
Oliver Biscuit has been immortalized in my Lifethread series—a Young Adult trilogy. Lifethread was my first published novel and the box Oliver Biscuit is sitting in—my first shipment of the print edition.
What a lucky kitty to have found such a loving forever home after being abandoned....And he's a star! I do think his role in Lifethread is even bigger than my cameo in one of mummy's novels. I'm going to have to speak to her about that. 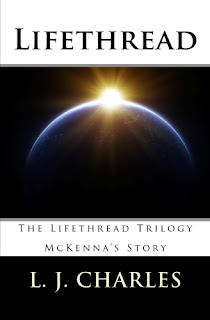 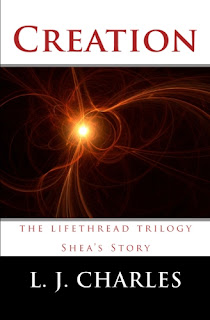 LJ has released two books you should check out. Lifethread and Creation.


McKenna Fin is armed, dangerous, and in love for the first time. She'll do anything to earn her humanity... except the one thing the Fate's require.

Stuck in her senior year of high school until she earns her humanity, McKenna Fin is responsible for cutting the lifethread of demons, and protecting teens from being possessed. To celebrate her fiftieth year of apprenticeship to the Fate Atropos, McKenna is given a new responsibility, and possibly a quick way to earn her humanity—severing the lifethread of deserving humans. Her first assignment:  Nathan Quinn.
When Nathan becomes a primary demon target and gets sucked into Tartania, McKenna’s duty as a Fated priestess demands she follow. McKenna can rescue him, no problem, but then she’d have to cut his lifethread. And he’s the one and only guy she’s been attracted to since forever.
The demons consider Nathan one of their own and fight to keep him. The time limit on Nathan's life is about to run out, and McKenna has to make the decision: sever his lifethread, or battle demons, defy the Fates, and keep him for her own.
Amazon: http://amzn.com/B004SV2NDO
B & N:  http://goo.gl/oWfXv

I recently finished Lifethread and it was fabulous with an intriguing premise that was engagingly executed.   It's not a standard paranormal. The mythology behind the plot was unique and the characters were multi-dimensional. Mum gave it FIVE STARS, and I gave it five paws. All in all, Lifethread was engagingly executed. I can't wait to read the next book in the trilogy. In fact I've just started Creation and I'm hooked by the story already.


Possession by an uninvited entity.
And the Perfect Guy has a shapeshifting demon in his family tree.
What’s a priestess to do?
Amazon:  http://amzn.com/B00630XAFS
B & N:  http://goo.gl/PXJX8
I hope you'll all check out these two great books, but first leave some lovely comments for the handsome Oliver Biscuit. You can follow LJ Charles on Twitter @LucieJCharles.
Posted by Confucius Cat at 8:04 AM

LJ, thank you for sharing this story. I believe there are perfect matches out there, and you and your DH found yours in Oliver. BTW, he is absolutely gorgeous!

What a wonderful way to find an addtion to your family. Does his bowl have a big star on it, since he's featured in your book? Lifethread sounds very unique, but being stuck in HS sounds a bit like Hell to me. Is it located by the river Styx?

I love reading about rescues...being a rescue myself. MOL.

It's wonderful to be a guest of Confucius Cat today.

Norah - The Biscuit Kitty would like me to thank you for recognizing that he's absolutely gorgeous.

Linda - He has art deco fish around the outside of his bowl because he thinks they're tastier than stars.

Catherine - He sends you a virtual head butt to thank you for the X and O.