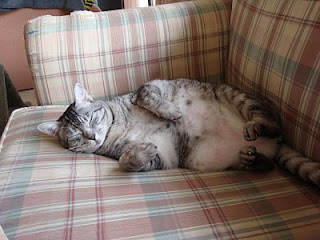 Today, I am so excited to introduce a fascinating cat and her owner. I don't think I've ever met an Ocicat before. What a beauty. Take it away Minna:
Name: Minna (short for Minnaloushe, after the cat in a poem by William Butler Yeats.) I’m a purebred ocicat *buffs her claws on her Owner’s best couch cushion* 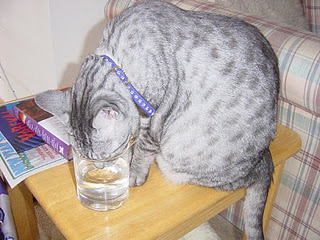 Favorite Pastime: Sleeping. Eating. Hunting for yummy things to eat that have been left out on the kitchen counter, like margarine containers (excellent to lick), cheese buns (crunchy cheesy toppings--yum), and muffins that have just come out of the oven (my favorite are banana choc-chip). Smooching my Feeder and acting all purry and adorable so my Feeder will feed me. Eating. Forgetting I’ve been fed 10 minutes after I ate. Eating. Sleeping.
Favorite Human: My Feeder. Though I must say, she is a very frustrating creature at times. I’m doing my best to train her to my exacting standards, but oh, it’s such a chore. Sometimes I have to resort to jumping on her pillow and yowling in her ear while she’s sleeping before she’ll get up and feed me. Or even scraping my claws down her bedroom windowpane if I happen to be stuck outside. Goodness. I feel tired just thinking about it. *yawns* Must have a nap.... 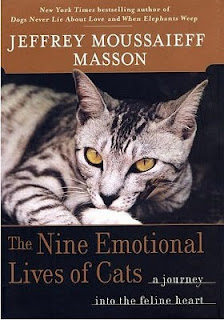 Most embarrassing moment: When my Feeder’s sibling chose to write all about me for his school speech. I was flattered at first, until I realized it wasn’t a speech about my star-studded past as a feline cover-model and heroine of the bestselling book The Nine Emotional Lives Of Cats. No, it was a tell-all expose! All my little foibles—like the time I went hunting and brought home a delicious piece of stale Madeira cake from the neighbor’s front lawn—were revealed to a bunch of evil children. I was a laughing stock! To add insult to injury, he got a very good mark for delivering such an amusing speech. Oh, the shame.....

BTW: Since my Owner cooks all my food specially for me so I don’t get all itchy and scratchy and lick my fur off, I guess it would be nice to give her a mention. She has published a book called The Crystal Warrior. It’s not anywhere near as fascinating as “my” book, but it’s won a writing award, and I’ve heard people say it’s not half bad. (And just between you and me, one day my Owner hopes to be famous as I am!)
Here’s a bit about my Owner’s book:
The Crystal Warrior by Maree Anderson
She’s a dancer, and the most important thing in her life right now is the success of her new dance studio. He’s an alien Crystal Warrior with one big-ass curse hanging over him. In a moment of weakness she lets him seduce her. Now they’re magically bonded and his life is in her hands. (Winner of the Romance Writers of New Zealand Clendon Award for full-length romantic manuscript.)
Chalcedony (Chalcey) has given up on men. Who’s got time for all that angsty dating crap when she’s got a new dance studio to run? Then she’s given a piece of wulfenite crystal and Lord Wulfenite, Keeper of the Shifting Sands fief, literally pops out of the crystal and plants one on her. Wulf is the man of her dreams… or at least, dressed like an ad for We Love Leather, with killer abs and delectable pectorals, he sure looks like the man of her dreams. But if there’s one thing Chalcey’s learned: If it looks too good to be true, then it sure as heck probably is too good to be true! And Wulf proves to be no exception.
Wulf doesn’t stop to wonder why he’s so attracted to Chalcedony. All he knows is he’s finally escaped from a centuries-long hell and he wants this woman – more than anything he’s wanted in his entire life. Chalcey doesn’t stand a chance. Before she realizes what’s at stake, she’s bonded with him and his life is in her hands. She knows she should walk away and leave him to his fate. No way is she planning on getting stuck with a guy who used to steal women for breeding stock! But the more she learns about Wulf and his past, the more conflicted she becomes. 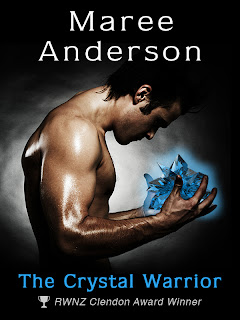 Only when the Crystal Guardian’s curse threatens everything Chalcey’s worked so hard for, does she finally realize what’s truly important. But even if she can figure out how to save Wulf from his fate, it might be too late.


Confucius Cat's mummy read The Crystal Warrior and gave it five stars. The sexy alpha male hero had us hooked from the beginning and we loved the sassy heroine who tamed him (just enough). The plot unfolded at a fast page-turner pace. Can't wait for the next book in the series.


As an aside, we just started the Nine Emotional Lives of Cats. I'm not sure I want my mummy knowing so much about what I'm thinking and feeling. ..(MOL) But she's loving it.
The Crystal Warrior by Maree Anderson available now at:
·      Smashwords: http://www.smashwords.com/books/view/80048
·      Amazon: http://www.amazon.com/The-Crystal-Warrior-ebook/dp/B005H6Y60M/
·      Barnes & Noble: http://www.barnesandnoble.com/w/the-crystal-warrior-maree-anderson/1105098939
·      iTunes: http://itunes.apple.com/us/book/the-crystal-warrior/id458552017?mt=11
For more information, please check out Maree’s website: http://www.mareeanderson.com or: http://www.thecrystalwarrior.com You can also follow on Twitter @MareeAnderson
Posted by Confucius Cat at 7:56 AM

Thanks for the book review. We don't know many Ocicat's either, but they sure are bootiful and graceful. Both books look good and M said she'd check them out.

Oh yes, M said to tell you she's enjoying your book. She finally got a Nook so is back into reading again. Can't wait to see you at #readpawty!

I loved this! And I've actually got The Crystal Warrior on my Kindle. I would kill for some reading time!

I must run over to Alibris.com and purchase the kitty book today. The Crystal Warrior sounds like a GREAT read, too. Going into the TBR list right now.

So nice to meet you, Minna. I've had some online conversations with your feeder, and find her to be delightful also.

I'll be looking for your book, and The Crystal Warrior is on my TBR pile.

Hi all, it's Minna's owner here--stepping in because Minna's napping on my bed right now *g*

I'm so glad you liked reading about our Ocicat. She had a bit of a rough start when we got her, but she's settled in really well, and become a much-loved part of our family. She's actually quite like a canine at times. Loves rolling on her back with all 4 paws in the air, wags her tail when she's happy, too. I hear that Ocicats quite like going for walks, but Minna is more of a couch-cat... except when someone starts cooking chicken, or one of the kids makes a chocolate drink. Then I swear she levitates off that couch and magically appears at your ankles *g*

Thanks heaps for hosting Minna, and for the lovely comments about my story, The Crystal Warrior, too. Lovely to meet you all! And I'll be sure and tell Minna you appreciated hearing all about her.

What a beautiful cat! I've never heard of an Ocicat.

The book sounds pretty good too.

What a beautiful cat and Crystal Warrior looks good too. Good luck with both of them.

Linda and Morgan, she is quite beautiful. Her coloring and spots make her look like a little wildcat. Evidently, ocicats first came about when a breeder tried to
breed an Abyssinian-pointed Siamese. The kittens appeared Abyssinian, but when those were bred, the resulting kittens were Abyssinian-pointed Siamese and a spotted kitten that the breeder's daughter nicknamed an ocicat. When more spotted kittens turned up in litters, they became the basis of a separate breeding program to breed more "ocicats".

They're a delightful breed--ours is probably a bit more quirky and neurotic than most, because of her upbringing. But we love her--even when she does bring in weird pieces of food from the neighbors' lawn, and cicadas and birds. You wouldn't think such a lazy-looking creature could be such a good hunter. But by crikey, she's quick!

Thanks heaps for stopping by to read my post!