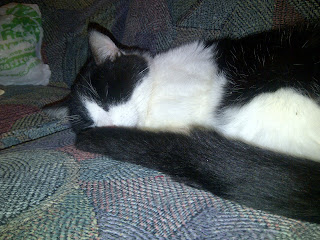 Today, the first Purrs 4 Peace of 2012, I wanted to say a very special thank you to some wonderful friends. Aimee Vinciguerra and her five furbabies have been devoted purr warriors and supporters of Purrs 4 Peace as well as being sweet and supporting friends to me and mummy.  So we wanted to give YOU a chance to get to know this great group. Take it away Aimee.
"This is Karma. He will be 21 in March. He has lived with me since he was 3 months old. A friend of mine was convinced he belonged with me and every day came to my work to say that he needed me. She was right, he did. I needed him right back! He's been there for many moves and raised a number of kittens and cats for me. I've lost five other cats after he joined my house and added 4 more in the last three years and he still keeps on going and loving everyone.

*Confucius Cat says: this must be one of the sweetest cat in the world. Smooooches to Karma. 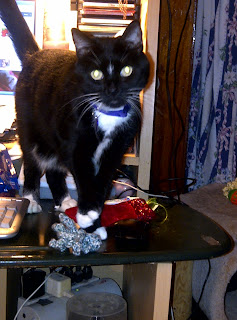 This is Kismet. She joined us in August 2009 after I lost my little girl Psyche just shy of 6 years old (she had cancer). I went into our local shelter and she was watching me through the window from the cat condo. She looked so much like my Psyche that at first I said I couldn't bring her home. After going through all the cat rooms, I went back to her room and as I opened the door she reached over and licked my hand.  She hopped off the cat condo, twined around my feet, grabbed a bite of food, and came back to me, three times. She won. Her name had been Chubbs, I promptly renamed her Kismet as she was “fated” to be with us.

**CC says: Awwww. What a lucky and adorable tuxedo cat. 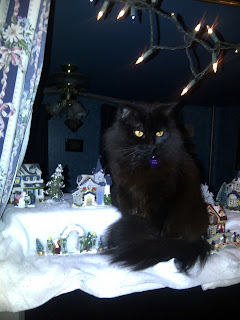 This is Sadari. She joined us last June 2010. I thought we were about to lose Karma and I didn't want Kismet to be as lost as Karma had been when he became the only cat so I went to the shelter I had gotten Kismet from and looked around. None of the cats I saw had that “spark” the one that says.. “yup.. we belong together.” I was about to give up when one of the volunteers called me over to meet this little lady. She twined around my ankles purring up a storm. I was petting her, talking to the volunteers and she nipped me. The poor volunteers were beside themselves. I started laughing. I had one JUST like her named Pixie that I had lost when she was 15 years old. Sadari saw that they were putting a cat carrier together and she hopped right in, looked at me, looked at the volunteer and said as plain as day. “let's go home” So we did! She's my little sheriff, keeping everyone in line! (Sadari loosely translates as a blessing of positive energy)
***CC says: What a gorgeous name....for a gorgeous cat. And you KNOW  I love the black cats! 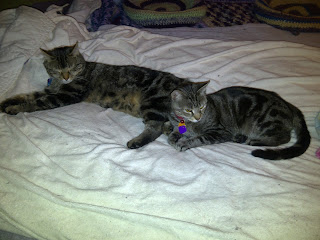 On the left is Independence (Indy) on the right is Liberty (Libby). September 2010 my neighbors moved out. I didn't know them by name but knew they had cats. They moved out. The cats stayed. Libby was pregnant and gave birth two weeks after they moved out. I brought her in, found homes for the two kittens that survived, and after the kittens went to their new homes brought Indy in. They were both neutered and spayed just before Christmas last year. The plan was to find them a home but they had their own plans.. they WERE home. So I am a Foster Fail and here they stay. Both are incredibly sweet and I'm very glad they joined my family.

*****CC says: Two little darlings. They are obviously intelligent... taking over the bed.
I've had cats as part of my life for as long as I can remember. My first was Velvet Ann. I was six when I got her. Cats bring me so much love, and joy. Coming home to their sweet faces as they run from all parts of the house when I come home makes my day. Curling up in bed with the two that will, Kismet and Libby, makes my night. My life wouldn't be complete without my purrchildren."

What a wonderfully compassionate and loving human to open her home to 5 furbabies. Aimee is an example of what every human should strive to be.

Bravo and thank you to all the purrticipants in this month's Purrs 4 Peace. I appreciate and love you all. You are mighty purr warriors. I know the positive energy you all put into the universe has to be yielding results. And in a world where the need for the positive is so great, you are a vital force for good.
Posted by Confucius Cat at 3:10 PM

Thank you so much for your accolades, CC! I enjoy being your friend and your mom's friend as well as being a purr warrior! The only thing that makes me happier is being a kitty mom! I can honestly say this is one of the very nicest things to happen to me to have your praise and friendship! Love you!

What a pleasure it was to meet this group of kitties and their mom. I'm thinking that first kittie looks a lot like me.

Mario you are sooooo sweet. I think there must be something about you tuxedo cats that make you adorable little darlings. Smooches my friend.