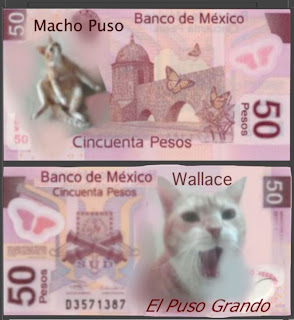 Fantastic Cat Treat today: Alicia Street and her fascinating cat Wallace. I already knew what a great author Alicia is, but I didn't realize she had such a handsome and interesting furry one. Now let's hear from Alicia:
Thanks, Confucius, for having us as your guests today.
In the past we’ve had more than one cat, but with Wallace, well, that just isn’t allowed. He simply will not tolerate any other furry critter in his domain. He’s one of those cats who takes over and tells you what to do.
If we’re working at the computer for too long and not paying attention to him, he’ll parade in front of the screen. Or sometimes he’ll start pulling on a kitchen cabinet door, letting it slam repeatedly until we get the message.
Wallace was a lost, little stray searching for food when we took him in many years ago. Because of that he has a slight eating disorder. Wild and stray animals have to master the art of “eat and run.” So Wallace has problems with speed eating and non-stop eating.
We think that is also why he likes so many different kinds of foods. He likes pizza, tofu and lima beans and even Mexican food. That’s why Roy decided to immortalize him on a peso. (He also likes to watch Mexican boxers on HBO with Roy.)
If we leave the kitchen before he’s satisfied, he’ll chase us down and swat our legs. And when we remind him that he’ll vomit if we feed him more, Wallace goes into the front bathroom — his complaining room — and launches into some throaty chants you’d swear were coming from his five hundred pound tiger cousins in Siberia. By the way, cats can make over one hundred different kinds of vocal sounds.
Our heroine in KISS ME, DANCER has three cats that live with her in the dance studio she runs. We’ll be releasing a Book #2 in our Dance ‘n’ Luv series plus a short story later this month."
KISS ME, DANCER (Book # 1) is a roller coaster of a romance between a divorced dad and a dance teacher.
Ballet instructor Casey Richardson takes an immediate dislike to the brash, arrogant Drew Byrne when he pulls his nine-year-old son out of her “silly” dance class. Still, she cannot help noticing his smoking hot body and bedroom eyes. A working class girl raised in the small fishing and farming community on Long Island’s rural North Fork, Casey knows all too well how easily a girl can get hurt by the notorious womanizing hunks that flourish on the South Fork in the Hamptons. Men like Drew Byrne.

The last thing she needs is for him to be the only one who can save her from losing her dance academy, the dream she has worked so hard to turn into a reality.
Unlike Casey, who’s had so many failures she calls herself “Calamity” Richardson, winning comes naturally to Drew Byrne. As head of a Fortune 500 company, he enjoys his wealth and has no problem keeping it a game with some of the world’s most beautiful women. So why should his son’s challenging, straight talking dance teacher get under his skin in a way no other female has? He tells himself it is because Casey is the only one able to bring his shy, uncommunicative son out of his shell. Or is it because he has finally met his match?
Add in a stint on a hit TV dance-off series, a cozy local coffee shop, a narcissistic rock star and a protective big brother for a sexy, heartwarming and fun read.
In addition to being part of today’s Indie movement, Alicia and Roy Street are traditionally published authors. In 2009 they received a Daphne Du Maurier Award for Excellence in Mystery/Suspense. They both share backgrounds in the arts. Alicia spent years as a dancer, choreographer and teacher; Roy in theater, standup comedy and visual arts.
HERE’S AMAZON -
http://www.amazon.com/dp/B0066DU0NC
B&N nook - http://bit.ly/vn7mDm
Smashwords - http://www.smashwords.com/books/view/108417
Our website - http://aliciastreet-roystreet.com/
Facebook - http://www.facebook.com/AliciaRoyStreet?sk=wall
Alicia has generously offered to give away a copy of her book. So leave a comment and you'll be entered to WiIN! Leave your email address for a contact. Thanks.
Thank you Alicia and Wallace for being here. I would love to be on money!
Posted by Confucius Cat at 5:47 AM

Wallace sounds like such a fun cat! I love cats... so long as they don't eat my chocolate. Does Wallace have a favorite pizza topping, or is "everything pizza" okay with him?

Now that's a cat with a big personality!! :)

Hi, Tamara! Actually, Wallace likes his pizza plain, although he won't say no to sweet peppers.

Hey, Coleen, thanks for coming by!

Wallace deserves a part in an upcoming book, Alicia, but it sounds as though he's a scene stealer.

Wallace sounds like a hoot. Do some of his antics show up in the book (under the guise of the other cats of course)?

Well, it sounds like Wallace knows what he wants, Alicia. Too funny. :)

I have all of your books and can't wait for your upcoming release!

Hi Linda! Actually, I patterned one after a cat I had several years ago. Amazing how they filter into our work, isn't it? Thanks for coming by.

Thanks so much for giving our books a try, Sheila! Now that I know about your snarky side, I think you'll really enjoy the Saylor Oz book.

I can't believe what Wallace eats. My goodness - he has a cast iron stomach. I am a dog person but reading this makes me think a cat like Wallace would be fun.

Your cat sounds like a total character! I love that his owners are health-food loving vegetarian. ;) My husband once had a beagle who LOVED alcohol, broke into whatever can, bottle or jug he could find. Oh, animals. What would our lives be without them?? (I don't even want to think about that.)

Oh my gosh, what a character! Although, I somehow expected nothing less coming from you two! :) I love animals with big personalities. I think cats are very cool. We can't have cats because I'm allergic but I love admiring them from afar. And it never fails that if I'm in a house with cats, they always make their way to my lap, or behind my head. Haha!

Can't wait to read Kiss Me, Dancer and can't believe I haven't already. What was I thinking! :)

Wallace sounds like a real character and a fun cat to have around.

I'm very familiar with the strange eating habits of cats who used to be strays :) Our Emma will eat herself sick if we let her because she was starving when we found her. She'll even eat green beans if I accidentally drop one on the floor :)

Thanks, everyone, or stopping by. For some reason Blogger was not accepting my attempts to post in the comments. But hopefully it will work today.

Thanks for stopping by, Louise

And I agree with you, August, having animals around opens our hearts.

Yes, Karen Jo, Wallace is so much fun. Nice to meet you.