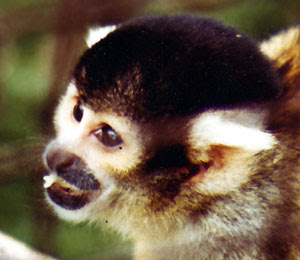 A number of high profile organizations and individuals have publically called for a stop to this project. Indeed, Scientific American has reported that The Physicians Committee for Responsible Medicine (PCRM), based in Washington, D.C. has sent an appeal to NASA’s administrator urging that this project be suspended.

I urge everyone to write to their elected representatives urging that action be taken to stop the spending of public funds on the torture of these animals in this cruel experiment. Any kind of animal experimentation is abhorrent to me. My human and I take pains to avoid purchasing products from companies that use animal testing. It sickens me that my human is being forced to fund animal torture. She has already contacted her representatives to protest.

And in addition to written protest, this week we will purrrrrrrrrr.

Week 34 of Purrs 4 Peace details are as follows:

• The cat’s human staff should assist their cats with the project by stroking and nuzzling the cat at the appointed time.

• Please post your cat name and the country you purr in at http://www.confuciuscat.blogspot.com/ as a COMMENT if you are participating in this historic project. (posting a link to your own website-if you have one-is encouraged.) Or let me know by message on twitter or facebook.

• Posting purrs on facebook ( Acolytes of Confucius Cat or as friend to Alley Mason) and twitter (@ConfuciusCat) is encouraged, since it inspires purring in others, but not required. On twitter please use #purrs4peace in your tweets.

Posted by Confucius Cat at 3:21 PM

Our mom says this is AWFUL and what they SHOULD do, is if they want to test on how things affect humans, take all of these nasty child molesters, rapers, murderers nd do your tests on them! They'd make PERFECT Specimens!

I agree with the Kool Kittie Krew. Leave the innocent animals alone!

We will be there purring too!

I'll be there purring too. I also agree with Kool-Kittie-Krew - do the expirments on rapists & murderers!

We will be purring.

We will be purring and we are having Mommy write a letter to the approbiate people. ~AFSS

We hate when pain is inflicted on any living thing.