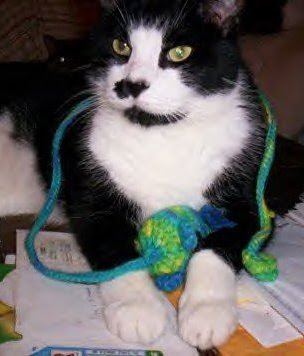 For the first month in year two of Purrs 4 Peace I am happy to express my special thanks to some very special supporters of the project: Will Appleby and his family who purr from their home in Illinois, United States.

Will’s humans, Don & Maria have been married for twenty years (wow- that is an example of loving commitment to admire in this time of temporary relationships.) Although Don & Maria have no human children they have a large family of furry ones which includes the very handsome Will (photo above), Alaskan Malamute Sasha and 19 other cats (who have all been fully vetted. Will and his brother Andy and Toby for instance were rescued and then hand-raised after being dumped in a trash can as day old kittens.

It all began in 1993 when, after they left the military, Don & Maria began taking in feral cats and strays as well as foster animals who for one reason or another never went to another home.

It is particularly appropriate to highlight them this month when we purr in support of the human and animal right of LIFE. I am awestruck at the generosity of spirit, the abundance of love and the wondrous humanity that it takes to provide LIFE to so many of our feline brethren who might otherwise have perished in shelters or in the wild.

Over half of the 19 cats are over the age of 15 years. One is mostly blind, one is profoundly deaf, one is crippled, one has a neurological disorder and one is crippled. (Awww. What marvelous humans these must be to care for special needs kitties).

Will and his family blog on Facebook, Twitter and Myspace, promoting good will, raising awareness for important causes, conducting prayer circles for those in need and making memorials for those who have crossed over the Rainbow Bridge. The purrs and prayers of Will and his family were much appreciated by me during my recent health crisis. The support was so vital to me and mum.

Thank you dear friends not only for your support of the Purrs 4 Peace project and the friendship you’ve shown me, but also for creating a living example of the kind of compassionate, loving and thoughtful beings this world needs in order for PEACE to prevail.

Next month (September 5th) I will begin listing individual participants in YEAR TWO. For now please accept my abundant thanks to all those that participated. Bravo!!!!!!!!!!!!!! Peace and love to all.

As long as people will shed the blood of innocent creatures there can be no peace, no liberty, no harmony between people. Slaughter and justice cannot dwell together.  --Isaac Bashevis Singer

It is widely agreed approximately 6-11 million humans died during the holocaust of the Nazis during WWII.

Another genocide in Darfur killed an estimated 400,000.

Ethnic cleansing in what was Yugoslavia estimated at 200,000 human lives lost.

What would happen if 6-8 million PEOPLE were euthanized each year for their own good or the good of the community (because no one wanted to take care of them).

Horrible! Reprehensible! I believe all would agree there is a fundamental RIGHT for humans to LIFE. So when we learn of such abominable actions as those of the Nazis we recognize them for what they are: CRIMES. These are slaughters we would and did fight to stop. But what of the animals?

Holocaust is defined as a thorough destruction involving extensive loss of life especially through fire.

There is a holocaust in progress among the dogs and cats of this world. Every 8 seconds an animal is euthanized in a Shelter in the United States….One LIFE is ended. It is estimated that 6-8 million are killed in the United States alone EACH YEAR. I was horrified to find out that not only are these animals killed but many shelters still use a “gas chamber” for the process. In 1996 the United States Courts overturned the use of gas chambers to execute convicted murderers (i.e., death penalty) recognizing it was too cruel in that the suffering before death was inhumane. COME ON PEOPLE! We won’t allow murderers to die a cruel death but we readily accept that it’s okay for innocent animals? IT MUST END.

Please support “no-kill shelters” and the spay/neuter programs in your area. PLEASE act to end use of gas chambers for euthanasia But more importantly let us not meekly accept this ongoing slaughter of the innocents. Support animal rights…the first and pre-eminent of these being right to LIFE.

Purrrrrrrrrrrrrr. Imagine the power of your purrs working in every mind and heart creating a new respect for LIFE –human AND ANIMAL.