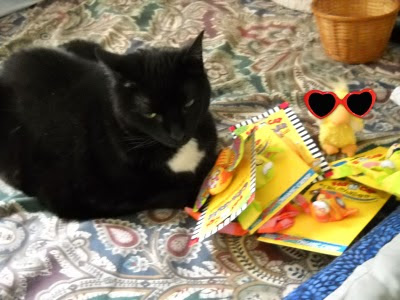 This week I would like to send mega thanks and love to a considerate friends and of supporters of this Purrs 4 Peace project, Robyn Harton. Robyn’s caring heart and active work for the interests of animals is evident in her tweets and those of her furry family on Twitter (@Sanjeethe cat and @Georgetheduck), her comments on Facebook and her excellent blog posts www.catsnmom.blogspot.com and www.georgetheduck.com.

Robyn very kindly helped me this week by allowing me to share some of the story of her extraordinary family. So I will turn this post over to Robyn’s words with only a couple comments from me:

“In 2001 our 18 year old mostly black cat Chloe had such severe CRF that we decided to let her out of her pain and help her to the Rainbow Bridge. We had thought we might wait a while to get another kitty. One day of no kitteh in the house changed our minds, and I went hunting. As with Chloe, I had a name, Sanjee, and just had to find the right cat that it fit.

A lady nearby had rescued a litter of feral kittens from behind a mechanic's garage and was giving them away to good homes. They were mostly black kittens. I went over and put my hand in a box of mewling hissing wiggling kittens. Sanjee crawled up my arm and picked me. That was that.

Sanjee was the spoiled baby for about a year. Then when we were doing some yard work, a half-starved tuxedo kitty came up to say hi. Well of course we had to feed her. Then we made her a little shelter with an overhang in case of rain. One thing led to another and she moved in. Boni Maroni was not ask skinny as a stick of macaroni for long.

During this time, the neighbors two doors down had two cats they didn't feed regularly or appear to care for at all. So we started feeding them, Pepi and Gree, on our front porch. For years they were "our" outside cats.

Obviously, with the food bowls out front, our house acquired a "free eats for cats" sign. And another starving tuxedo kitty came to get handouts. Pepi and Gree didn't particularly want to share and chased her off. That broke our hearts, so we grabbed that little skinny mostly black cat and moved her right in too. Mini did not stay mini for very long either.

Down the road a couple of years, the awful neighbors who "owned" Pepi and Gree up and moved away and left the cats. What could we do but adopt them too? They ended up moving in to the house also. Then we had a house of 5 mostly black cats.

Being modern kittehs, they started blogging and then tweeting. On Twitter, Sanjee met up with @Manxinton who started The Duckie Club, and just had to get her own duck to join the club. She got her duckie and hugged him and squeezed him and named him George.

At a charity twitter pawty, @Manxington's duck @GrimyDuck started doing a Noms Booth for the charity. Nom a duck for a buck! Well that sounded like fun so George just had to join in. Since then he's become a head barktender, head of operations for The Anipal Times, and a DJ, all of which he does to help out animal charities and anipal friends. Sanjee approves of this as it keeps her from having to work that hard”

What a family. Truly an inspiration for humans, cats and stuffed ducks everywhere. Thank you Robyn and family for your gracious support and friendship. Much appreciation. Purrrrrrrrrrrrrrrrs 2 U all.

Posted by Confucius Cat at 2:22 PM

Wow, that is such a great story. Even though I know them from Twitter and Facebook I really didn't know much about them. That was a fantastic tribute!

What a wonderful story. Thanks for sharing.

Here they have all been very close friends and I never knew that story. They truly are wonderful peeps, with a wonferful mostly-black cat family and, of course, my buddy George. Good pick mama & CC.

Aw, thank you Confucius :) We does not feel like we does anyfing partikularly speshul. We just does whut we can.
Purrrrrrrrrrrs,
Sanjee and tha resta tha Hotties

KC and the Giggleman Kitties said...

We's really enjoyed that story, Mom ML readed it out loud to all us kitties.
We loves tha Hotties so much, they's tha most wonderfullest cats and hoomans in tha wurld.
Love & Purrs,
KC

How interesting. WE didn't know the story of the Hotties so we're glad to read it.

Very nice story. It's great to see people stepping up to help animals.

We love da Hotties! Dey is some of da most caring and helpful kitties in da blogosphere!

Awwwwww!!! That was great!! We have known the Hotties for a few years and didn't realize how they all came to be a family!! Thanks for sharing with us!!
Your TX furiends,

We LOVE the HotMBCs. That is such a wonderful story too!!! You guys are just so uplifting!