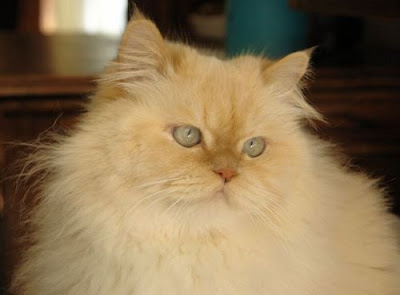 One of my first friends on twitter and an inspiration for my interest in world peace is my wonderful friend @zbluemoon (Bebe). I am so very grateful for the enormous support of #purrs4peace and the generosity of spirit exhibited in her tweets. She very kindly agreed to allow me to share a bit of her story with you and so I now turn this post over to this very sweet friend.

“Our house is full of former lost souls who have found love and happiness with us in the coastal Santa Monica Mountains in Southern California. We share everything with many cool cats, sweet dogs, lizards, and birds. Most of our fur babies are from various animal shelters and pet rescues. Two kitties were rescued from a television studio where I use to work and we found homes for most of the stray cats on the back lot at the studio.

Emma the pug is a wish come true for our youngest son who has Asperger syndrome and Bipolar disorder. Our other dog, Lemony Snickett, was shuffled from shelter to shelter all over southern California until we found him. It took just one look into his beautiful deep brown eyes and we were in love! Lemony always kisses everybody so we nicknamed him, Snicky Licky.

While camping in the red desert of Navajo Indian lands in Monument Valley, which is located in northern Arizona and southern Utah, a stray doggy suddenly appeared during a midnight full moon. Josie is a very smart and sweet old soul, who gets along wonderfully with all beings.

Last spring we rescued four tiny squirrel babies from our huge pine trees when their Mommy suddenly disappeared one day. Those babies live nearby and have made their own families in some tall pine trees. We are always on standby to assist our local squirrel rescue group.

Many trees surround our property filled with a variety of wild birds such as seagulls, blue jays, hummingbirds, sparrows, robins, doves, mockingbirds, woodpeckers, titmouse (plural = titmice?) finches, swallows, crows, red-tailed hawks, owls, and more. Every spring a pair of mallard ducks come for a stay and share their newborn babies with us. The cats especially enjoy watching them!

About nine years ago, I cared for a tiny five-week old baby boy Persian and British Blue mix kitty, which I nicknamed Itty Bitty. We bonded so tight that when it was time to return him, I wrote a letter expressing our deep mutual love, offered to purchase him and to find another kitty just like him as a replacement, since the new owner had never even met Itty Bitty. It was a longgg night waiting for an answer, however, the next morning Itty Bitty was given to us! The new owner refused any money and shared Itty Bitty’s story with us.

Itty Bitty was born in Berlin, Germany and traveled to San Francisco, California with his owner, a young woman who was the girlfriend of one of Neil Young’s guitarists. Since they were performing in a three-day concert, their friend drove the kitty seven hours south to our home so I could take care for him. One week turned into two because Neil and his band, Crazy Horse, were producing a new song about 9/11. When the guitarist (I’m protecting his identity) returned home he was excited to see his new baby kitty. This very kind man understood Itty Bitty and my bonding, so he very generously gave him to us. I was so touched at his selflessness and cried for hours.

Itty Bitty sired one litter with his love, Bella, and they had three baby kitties. Since these are the only kitties we’ve had since we were children and the fact that we had both parents, we decided to keep the entire family! One baby was named Bono (think U2) and he is my avatar on Twitter. (See the above photo). Bono is a white flame point Persian with very large, lengthy whiskers. His paws are huge and he’s a very longgg, muscular, heavy cat. When I whisper his name, his light sea blue eyes get soft and his demeanor becomes tender and gentle… otherwise, he’s very strong and determined, although he always obeys his daddy, Itty Bitty. Bono’s little sisters are both incredibly sweet, inquisitive, and very affectionate.

All of our other precious kitties are strays or rescues and get along real well with each other and they are all very, very loving. All our cats and dogs are spayed or neutered.

Our oldest kitty is Coral (@CoralKittyCat) and it took us a few weeks to rescue her from UCLA. She’s fasssst! We will celebrate Coral’s 19th birthday on Thanksgiving this year! Although she’s an old lady, she’s still pretty fast and always wants things her way… J

I hope someday you’ll join us and the world can live as one.

Thank you my friend Bebe. You are a source of inspiration and enlightenment. Much appreciation and applause (*four paws clapping*).

Bravo and thank you to all the Purrs 4 Peace purrrrrticipants who include:

Posted by Confucius Cat at 1:56 PM

Darn Iz missed it again, but I'm happy to read that story abowt all teh happy animals wiv Bebe an espeshly Itty Bitty.