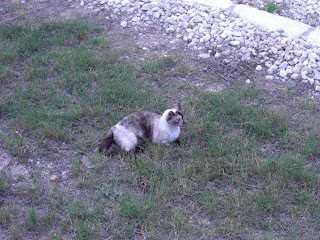 I have a very cool cat treat this week: James Hatch and his fascinating cat with four names. Here's James and NMC (that's my favorite of the names...lol)
"Cats! You gotta’ love ‘em. I’ve had at least one cat for a long as I can remember. Not that I’ve wanted one necessarily, but because they are drawn to me. In fact, when I first started writing, a polydacts cat with six toes showed up at my back door. It seemed an omen, like one of Hemmingway’s cats had arrived to watch over me. I fed that one until my pile of rejection slips exceeded one-half inch, and then determined the cat wasn’t helping at all. It had a home; it just liked to beg. My current constant cat companion showed up a little later. She was a pregnant “teenager,” scrawny and hungry, and had probably been dumped in our neighborhood by someone who didn’t want a cat in that condition. The cat seemed to know I was a soft touch and, on spotting me, immediately ran up and began rubbing on my leg, purring loudly.
I weakened. I fed it. It never left. That’s her in the picture. She has four names. I used to call her “NMC” for Not My Cat, until she had been here for five years. Then I started calling her “RC” for rotten cat because she’s not friendly to anyone except me. My wife calls her “Limestone” because her mix of colors looks like that type of rock, or “Blue” because of her beautiful blue eyes. I kept her six kittens until they were eating ham and soft cat food on a regular basis, and then took them to a pet store for sale. They were tame and healthy and are making some child happy even now.
Ever wonder how cats process data? I made a stab at it in my paranormal comedy released last week by Solstice Publishing. Here’s an excerpt from Oh, Heavens, Miss Havana! : Advice columnist by day, assassin by night, Miss Havana’s spirit wrongly considers itself the Angel of Death, but is brought to task by God.
Thank you for reading, and thank you for having me here.
James L. Hatch
Author for: xoxopublishing.com, Solstice Publishing and Eternal Press "
Oh Heavens, Miss Havana sounds great. Here's the blurb:
Oh, Heavens, Miss Havana! Blurb: Having performed a single selfless act, Miss Havana finds herself on probation in heaven. After many missteps, she discovers she still retains the powers she had as The Queen of Darkness, and realizes she’s on probation as much to keep her from joining forces with her daughter, The Princess of Darkness, as anything else. The Brazilian, a large black man with a dreadlocks beard who waxes regularly, is her “guide”, but she ignores his advice until he’s taken off her case. Guideless and in a foreign environment, she consorts with evil spirits from her former realm, especially Waldo, a shadow creature so named because he’s so hard to find. She acquires a copy of “The Angels Guide to Earth”, comes to believe she is the Angel of Death, and returns to the surface as an advice columnist and assassin. She wreaks havoc before God intervenes for a final showdown...which, as it turns out, isn’t as final as most would hope.
James has even given us an excerpt so read on!!!!!!!!


Oh, Heavens, Miss Havana! Excerpt: I mentally review the Reaper’s rampage, remembering the wad of cloth he stuffed in the girl’s mouth. As loud as he was bellowing when I left him with Waldo, it’s no wonder he did that … just in case she woke from unconsciousness as he cut her throat. The only solace here is that it will never happen again. Not My Cat, the scruffy yellow stray I’d seen when I was here last, lurks just beyond the edge of the underbrush, and I wonder if such an animal can be inhabited by a spirit on probation. 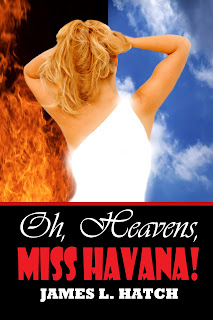 I drift over, slither in and am surprised by what I find. The cat thinks in images. It remembers what it sees, but doesn’t assign moral judgments. It remembers where food can be found, and where warm places to sleep are located during the frigid Denver winters. The imagery is a hierarchy relative to survival, with the most easily available water, food and shelter at the top of its memory, hunting areas next, female cat locations and, finally, miscellaneous—things to do with humans, most of which are ignored or inconsequential.
The cat looks out at a Canadian goose basking near the water, but recalls an image of a severe beaking for trying to get one. It doesn’t care about humans in general, but is human-like in its longing. It wants what it can’t have, even when threatened with pain. Its tail twitches in anticipation, but caution prevails. I’ve always been amused by cats, and find this one as interesting from the inside as others are from the outside … until I come to a very disturbing image in its inconsequential and fading memories of human interactions.
The cat watched the Reaper’s fourteenth victim being slaughtered, but the Reaper was not alone. What in Lilith’s Realm is this? I exit the cat, project myself to the Reaper’s home and interrupt Waldo’s fun. “We need to pry a little information out of him before we kill him, Waldo. He had an accomplice.”
Waldo beams with delight. “Does that mean we get to do this again?”
I nod. “Get the muriatic acid; let’s get his attention.”
*****

You can also find reviews and additional excerpts at http://cookinwithmisshavana.blogspot.com.
I hope you'll check out James' book and his fun blog.
Posted by Confucius Cat at 6:15 PM

I like your cat with four names. The excerpt sounds great and a little creepy. Just my kind of read.

I used to have seven cats. I'm sure I was known as the cat lady in my road. I used to come home and find strange ones, who had let themselves in the cat flap, lounging aroubd my hallway. lol I've now settled for two dogs, but who knows, cats could still me on my 'to get' list!

We currently have five cats, all strays. At one time we had thirteen and took some to the pet store. They were all sold. We gave one to a good home and were down to four, then Bobbi showed up with a broken tail. I can't say no.