Hi all, Today I have a fantastic cat treat for you: Linda Andrews and her furry babies Bear and Peaches. I always knew Linda was a fantastic author but now you'll see what a great human she is. Take it away Linda. 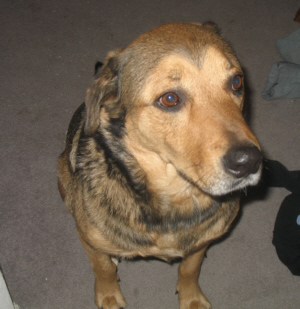 "People don't own cats. Cats own people, if you're deemed worthy, that is. I am happy to be the caregiver of 4 cats and the protector of one very large, very scared dog. We all get along mostly well, until the dog decides he wants to play with one of his smaller siblings. The sibs don't appreciate a 80 pound beastie charging after them or slobbering on them, so they cry out and low and behold soon the dog is trapped under the table with four cats growling at him.
Fortunately, all the animals like to sleep A LOT so it doesn't happen as often as it could. 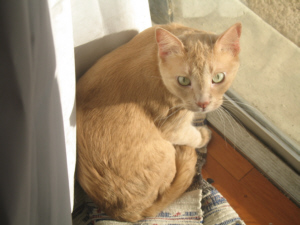 While I could talk about the pets antics for a long, long time I thought I'd just introduce you to Peaches. Technically, Peachy belongs to my daughter but she has set herself up as the alpha cat in the house. She is the only animal in our house that was purchased and maybe that makes her the most normal. In case, you were wondering--our other animals including the fish were rescued--one from being crushed by a forklift at my husband's work, two from being coyote kibble after their mother was eaten (they were 1 1/2 weeks old) and one was given away after the owners moved out leaving the pregnant mother locked in the back yard. The fish came from a neighbor whose tank started leaking.
Now back to Peaches.
She is the only cat I know that comes when you call her. And she does love my daughter, preferring to sleep on her bed. Of course, my daughter also dressed the cat in a ballerina tutu and pushed her around in a doll stroller for the first two years of her life. They are both 9 years older, so that rarely happens anymore.
But aside from my daughter, I am Peaches preferred companion. (Which irritates the dog as he thinks I am his property.)
Peaches likes to sit behind me when I'm on the couch, takes a nap on my hip when I nap and plumps my belly to see if I'm soft enough to curl up on when it is cold. She also loves to groom those in her pride. If she sits behind you and you don't offer up an arm for her to sample, she'll bite your head. Not fun. Ask my dad, he's bald. After a few licks, she hunkers down and keeps an eye on the other lesser animals of the house. Which is pretty much everyone except me.
She does not like the printer as she is not allowed to play with the pages when they come out. But when I'm printing out pages, she perches on it as it is warm so they have reached a truce. She also gets very jealous of the time I spend on the computer. Should I spend too much time, she casually walks across the keyboard inserting lots of weird characters and sometimes hits the power key to turn it off. Not fun.
She hasn't quite figured out how to turn off my iPad, but she does like to rub her cheeks against the edges. So I think she is plotting and thinking. Now I have to go. Four cats are staring at me, subliminally telling me that it is time to feed them. Must obey cats. Whoops. Here comes the dog. He gets to lick the cats' bowls clean."

Linda has a wonderful knew book called Blue Maneuver:  The extraterrestrials have landed and they're human. Rae Hemplewhite didn't believe in aliens until a close encounter with 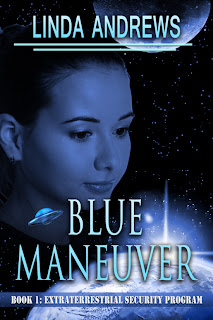 out-of-this-world technology drags her into the extraterrestrial security program. Helping alien refugees adjust to life on Earth is difficult enough, but her first clients have a price on their heads. Plus, her new partner seems torn between the urge to kiss her or kill her. And that's the good news. The bad news: Alliances are forming in deep space. If Rae doesn't keep her witnesses alive long enough to transfer their top secret information to the right faction of humanity, Earth will become a battlefield.
You can find Blue Maneuver at the usual outlets including Amazon.com: http://amzn.com/B006VOKXME
Linda Andrews lives in Phoenix, Arizona with her husband, three children and a menagerie of domesticated animals. While she started writing a decade ago, she always used her stories to escape the redundancy of her day job as a scientist and never thought to actually combine her love of fiction and science. DOH! After that Homer Simpson moment, she allowed the two halves of her brain to talk to each other. The journeys she’s embarked on since then are dark, twisted and occasionally violent, but never predictable.
You can follow Linda on Twitter @LindaAndrews and visit her blog
http://lindaandrews.wordpress.com/
Posted by Confucius Cat at 7:40 AM

Loved this, Linda. Your fur babies are adorable. I have a real soft spot for timid dogs (I have 90 lb scaredy-cat). And Peaches sounds awesome!

What a great writer Linda is. It was so nice to meet her furbabies too.

Linda, it was fun reading about your fur babies. I have two dogs and one cat, but my cat knows she's special. After all, she inspired me to write a book.

I might use the 'bald head biting' in a future book. It gave me a visual that made me laugh.

Thanks everyone. I do love my babies especially in the wintertime.

Edie, my dad would be glad someone thought it was tunny. He wears his hat whenever he sees her.

Such fun to meet your fur babies. They sound adorable. Mine is kneading my thighs as i'm typing this...and I'm using a laptop. Any peculiar words or misspellings are not my doing.

Love the blog and Peaches. Cats do own you. My stupid cat likes to stare at me while I type while my Abby totally ignores me. She only sits on me when it suits her. Love your books!

Love your kitties, Linda. Little Spunky is doing great and we are having fun with him.