Big excitement today as we have a fantastic cat treat: Lynn Crain, her handsome dog Jasper and the cutie-pie, Harry. I hope you'll enjoy their story. Here's Lynn
"My Snarky Boy
When we moved to Vienna, Austria, last year, we were all set to bring our dog, Jasper. He’s a lab mix of some sort and I missed him dearly as the first months rolled by. I went home for a couple of months to get him ready to go when the realization came that he could not be crate trained in the two months I had to do so. I was devastated as this was the first dog who was all mine. Most of them had bonded with my husband more than me but not Jasper. He was my baby and I was heartbroken. 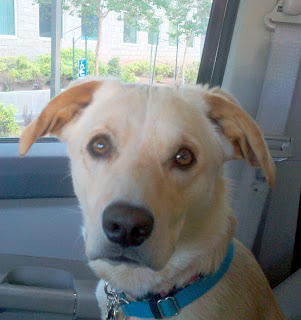 Trying to trudge along being in a foreign country where I knew no one and didn’t speak the language was wearing on me. There were days that I missed my kids and grandkids horribly and all my animals. We’d also left behind three cats who weren’t good candidates for foreign travel either. Still, I tried my best to adjust but after the second time my husband went on travel, I told him that I desperately needed to get Jasper over here or find another dog.
At first, he wasn’t happy about it but I finally convinced him just how lonely I was being away from everyone. I needed something I could rely on when he wasn’t around. Sure, I had the phone numbers of people I could contact who were acquaintances from his work but I didn’t really know any of them. I knew an animal would somehow make me feel less alone and more safe when he was away.
We scoured the internet and other sources to find someone who could crate train Jasper. We had no luck and those we did find were so expensive I could come home from Europe two or three times. After a visit to the vet where we talked about me taking him back with me, it was decided that since he was terrified of the crate it would be in the dog’s best interest not to bring him with us. Jasper would stay home with my youngest son.
This was in August 2011 and I started looking for a way to get another dog while I was in Austria. I looked at the shelters and found that it was extremely hard to qualify for an animal here. The best chance I would have would be to go to a breeder. I started looking into dogs that I could carry on the plane with me, as I never wanted to get another dog I couldn’t take with me when I traveled. After a couple of weeks looking on line relentlessly, I discovered Parson Russell Terriers.
I had known about Jack Russells and loved the breed but they could get hyperactive...that wouldn’t do on an airplane. I looked at the miniature Jack Russell but the nearest breeder was in England and I really didn’t want to go out of Austria to get a dog. While perusing the internet, I came across a Parson Russell Terrier site and checked them out. They had a list of breeders and I started to contact them regarding puppies.
While doing that I came across the cutest puppy I’d ever seen in my life. His name was Harry Potter and he was just adorable. First, I had to convince my husband that it was worth it to take a train ride six hours just to get a dog. Once that battle was done, I had to make sure the breeder approved of us as well. Some have very strict guidelines and we’d already failed one or two as one breeder only sold his animals to owners who planned to use them for hunting. Another refused to sell to people who lived in the city.
The breeder and I had conversations via phone and email for a whole week before we decided to make the trek as the pup would be quite expensive. Nevertheless, I told my husband my peace of mind would be worth every cent. Then there would be the added benefit that the puppy would force me to exercise every day.
The day finally arrived and we missed our train. We had to wait just a short time for a different train and a slightly different route. We contacted the breeder and told her we’d call when we arrived. It was a godsend to find someone who spoke English as we had few communication issues. Finally, we arrived at our destination just outside of Salzburg. Birgit picked us up from the station and asked us a lot of questions on the way. We answered the best we could because we were just learning the city ourselves and didn’t know everything. Once we arrived at her place, she took us to where the puppies were and I was in love. Here’s one of the first pictures we took of our new puppy boy. 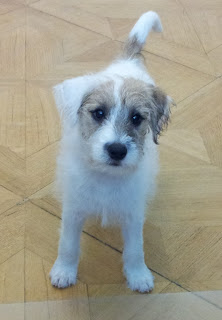 This dog has been a lifesaver in more ways than one. I have exercised more and will continue to do so. Since he’s been around, I’ve lost over 30 pounds...this is a great thing...very good. He’s provided companionship to me every day and is a joy to be around. He helps me to feel safe when the husband’s away. Because of him, I now have an entry into the Austrian way of life because they love puppies and adore dogs. We have gotten more comments because of him and I’ve made more friends since he’s been around.
Now, you’re probably wondering why I’ve taken to calling him Snarky Boy. Harry is not your normal terrier and I’ve had many comments on that. We have a very calm household and he doesn’t do any of the normal behaviors of his breed. Most actually tend to be nippy, snarly and a variety of other terrier habits. Not so with Harry and when he does, I’ve started calling him Snarky Boy. When he hears that, he actually stops and occasionally changes his attitude, something that the dog trainer we’re working with was amazed about. He is generally a very happy dog with a sunny disposition, he greets all other dogs as friends and wonders why not everyone thinks he’s the cutest pup in the world! 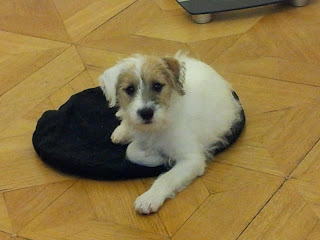 Here’s another picture of Harry today at six months old. We’ve had him for four months now and wouldn’t trade him for anything! Matter of fact, he will soon have his own blog and twitter account. Just look for Snarky Boy and his picture. Thanks for letting me share with you one of my best friends ever." 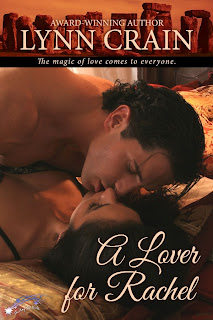 Lynn Crain realized at an early age she wanted to write. She took the long way to being published by doing a variety of things like nursing assistant, geologist, technical writer and computer manager all of which have added to her detail-oriented stories. Now she’s a full-time storyteller and weaves fantasy, futuristic, and paranormal tales, as well as erotic stories for various publishers. She normally lives in the very hot southwest with her husband, son, two dogs, three cats, and she’s gotten rid of her snakes. Don’t ask. Other members of her clan live nearby and include another son, daughter-in-law, and two grandsons, plus various long-time friends. She is a past national board member of the RWA; founding president of Las Vegas Romance Writers Chapter of RWA; has held the positions of president, vice-president, secretary and contest chair of EPIC. Her latest adventure has taken her to Vienna, Austria with her husband as he works for a UN-affiliated organization. You can find her hanging out at A Writer In Vienna Blog (www.awriterinvienna.blogspot.com) and various other places on the net (www.theloglineblog.blogspot.com; www.twitter.com/oddlynn3; www.lynncrain.blogspot.com ). Still, the thing she loves most of all is hearing from her readers at lynncrain@cox.net.
Lynn has a great new book called A LOVER FOR RACHEL, which is available through Smashwords and Amazon.
Rachel Hamilton comes to Stonehenge to celebrate her birthday on Summer Solstice, only to find herself trapped beneath the massive rhyolite bluestones with sexy wizard, Dewin Kingston, who convinces her that she is the key to their escape.
A Lover for Rachel Smashwords Link
A Lover for Rachel Amazon Link
Posted by Confucius Cat at 7:01 AM

What a wonderful story. I can't imagine being without an animal in the house. I'm glad you found him and that he's keeping you healthy. What does he think of your writing and is he trying to get a spot in one of your books?

Your Snarky Boy is sooo cute! I'm so sorry you had to leave Jasper, but hopefully you will be reunited soon. Great story and an interesting peek into living overseas!

What a sweetie! I'm glad your story has a happy ending. I can tell you're a great dog mommy, too.

Even a cat lover like me couldn't resist this sweet pooch.

What a sweetie of a puppy. Congratulations - it was a purrfect match!

Thanks, Linda! I couldn't imagine it either which is why I insisted on getting another animal. I'm just so glad I did. This little guy Harry is just amazing.

We just had our second round of snow. The first time he played in it and we thought it a fluke. This time, he is so joyous and happy bounding through the drifts that we can't help but laugh.

Thanks for taking time to check out my post.

Thanks, Christy. Harry is so adorable and the first thing I said to my husband was 'he's got a great face!'

I can't wait to get Jasper and Harry together. I hope to do so sometime this spring.

Thanks for stopping by. Harry is a sweetie and I just can't wait until we're all together again!

At first, I didn't think I was a good mommy to this pup as he's so different than any other I'd ever had. When I commented to the breeder that he had started crawling in my lap to nap, she told me that he completely trusted me. That made me so happy.

Thanks for stopping by.

Yeah, my husband is just waiting for me to ask for a kitten as well as I love my critters. LOL! Not so sure on that one as most cats don't travel well in airplanes.

Thanks! He is a sweet boy and I'm hoping to introduce him soon to the joys of sharing me with the cats.

It will be wonderful!