I have a sweet cat treat for you today: Fabulous author Lizzie Starr and the handsome and inspirational boy Noid:

"Thank you, Confucius Cat, for having me here today! I'd like to share a bit about this beautiful fellow. Noid was my brother's dog (he's crossed the Rainbow Bridge) and shared my home along with the bro. Noid was half black lab, the other half the result of a fence jumping black chow named Bear. Even though he was the runt of the litter, he grew into a strong, big fellow, who had nothing but love for his people. Luckily, I was easily included in his family.
You may wonder about Noid's name...the bro worked for a pizza chain at the time and their advertising icon was 'The Noid'. In my tales, Noid is named by his young human who is learning to write. He laboriously puts down letters then ask what they spell. The closest the adults could come was Noid. (As a side note--I did this when I was little, only I named a horse Cyclops. He was a great horse.)

Have you seen the cartoon Two Stupid Dogs? I also had a miniature dachshund and Ruatha and Noid became best buddies, just like the pups in the cartoon. Noid was pleasantly slobbery and Ruie loved chasing a ball. In fact, there were times I wondered if the cartoon creators had a camera in our house! 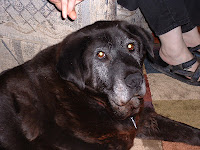 But even more than a great friend, Noid was inspiration for a character in my fantasy romance series. In my first book By Keltic Design, Noid helps his human find a way into the Faerie Otherworld so they can join the faerie hunt. When Stephen falls in love and wishes to remain in Faerie, Noid stays with him. And becomes the brave hero many times over through the series. Sometimes I think he's the most intelligent being populating my fantasy worlds. I had a great source of inspiration!
Having an animal character gives my story people another chance to show the stuff they're made of. How they interact with an animal says so much about them--both the heroes and the villains. And a challenge to my writing skill--I had to show Noid's emotions and reactions in a realistic manner.
We miss Noid, and Ruatha who have both crossed the Rainbow Bridge, but now the household has another mini-doxi named Lessa and an aloof, tuxedo cat named Goku. And I'm pretty sure they, as well as many other past feline and canine friends, will all make it into my stories. Besides adding so much to a tale, having them on the pages to read again and again helps keep their memories in my heart."

Allyn Keely, Celtic artist and friend of Faerie, finally finds a man she can love. But she’s older than he is and faces the insurmountable task of helping him realize his destiny in the Otherworld.

Successful businessman, Jaye Zeroun prides himself on his realistic, but lonely, view of life. Until Allyn knots her way around his heart and fills his life with a fantasy he refuses to believe. Then danger threatens their love, forcing him to either accept a deadly battle or lose the very things he never included in his life, a family and a love beyond his wildest imagining.
Amazon:  http://www.amazon.com/dp/B0057XJX8U

and on Facebook; www.facebook.com/lizziestarr
Posted by Confucius Cat at 6:53 AM

Thanks for sharing, Lizzie! I just wanted to jump into my computer screen in give Noid a big hug!

Aw, what a sweet guy. Thanks for sharing Noid with us, Lizzie.

Noid sounds like a real sweetie. I'm glad he lives on in your stories. Did he have a particularly endearing habit that just had to make it in your book?

Thanks, Tamara. Noid loved hugs--even if they did get a bit slobbery from his side! :)

Norah--Noid was a friendly fellow, he'd love all this attention.

Linda--hmm, an endearing habit. Like a lot of dogs he had that head cock down pat. He was especially cute since he had the lab muzzle, and tiny little chow ears. And that black chow tongue. He was much more intelligent than he pretended to be.

*lizzie, Pets are fabulous and it is wonderful to hear about Noid and that his character continues on in your stories.

My characters have pets but I never used the pets that I have had who have crossed the Rainbow Bridge. It is a great idea so that they can always live on. What a fabulous idea.

Thank you for sharing and it is something that I will look at as pets are wonderful.

Thanks, Dee Ann. I continue to use some of my past friends in my stories--even if it's just their names.

It's easy to write about an animal friend you already know. The fun is always seeing how your human characters react with them!

Lizzie, thank you so much for sharing this story. We hope that everything will be fine for the sweet guy. Thanks for sharing with us. Have a fantastic rest of your week.
World of Animals