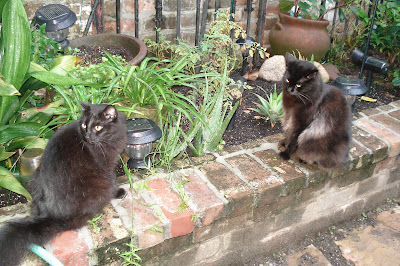 The statistics are staggering...and heartbreaking. According the the Humane Society of the U.S., 6 to 8 million animals are entering shelters each year. At least half are euthanized because they are not adopted. THAT IS THREE TO FOUR MILLION!!!!!!!!

No wonder Petfinder.org and the ASPCA are celebrating October as Adopt a Shelter Dog Month to increase awareness of the problem and find homes for the homeless. October is also a month when the plight of cats is recognized. National Feral Cat day was on the 16th. It is impossible to know how many feral cats there are in the U.S. Some statistics state 70 million. Shocking that there are so many homeless cousins out there.

But going back to the Shelter animals - only half are adopted. DISGRACEFUL. A particularly OUTRAGEOUS and depressing statistic within that statistic is that black cats and kittens are SIGNIFICANTLY less likely to be adopted. A 2002 study in the Journal of Applied Animal Welfare Science examined adoption rates over nine months in a California pound. The study found that black cats were about half as likely to be adopted as tabby cats and two-thirds less likely than cats with white fur. But for cats in general, only 20%, found homes. Those remaining were euthanized. The HSUS acknowledges that, to this day, a disproportionate number of the cats euthanized each year in shelters are black.

Why? At one time cats- in ancient Egypt -black cats were worshipped. Black cats were seen as bringing the best of good fortune to any home. Egyptians even believed that the life-giving rays of the sun were kept in a cat’s eyes at night for safekeeping. But at some point in western culture a superstition about bad luck became associated with the black cat.

When it comes to adoption of abandoned and shelter animals...these superstitions aren’t fun any more. They are deadly.

For those who know my story you know that my sister Pie Face (above pictured on the left) and I were found as tiny kittens living in a tree knoll in Old Sheldon Church cemetery in South Carolina. We had been abandoned there to starve or die in the elements as wee kitties probably because of some unfounded prejudices or fears. Fortunately, our human mummies did not succumb to the ridiculous myths and recognized us as the magnificent creatures we are.

Who could look at beautiful and sweet (don’t tell her I said so) Pie Face and not see they would be fortunate to have her cross their path. As to me, mummy says almost every day that I am the luckiest thing that ever happened to her.

My wonderful human aunt Jacqui also adopted Agatha (pictured on the right) who at the time was feral and starving with a ragged coat. You can see how luxuriously gorgeous her fur is now...and she’s definitely NOT starving. Aunt Jaqui can attest only the best of luck has been produced by gentle, playful, Agatha.

We want other humans to experience the marvelous luck that comes from the adoption of an abandoned animal....particularly a black cat. Therefore, our purrs are dedicated to giving homes to the homeless this week.

Week 20 of Purrs 4 Peace details are as follows:

PURRING TO BRING LOVE, SAFETY AND HOMES TO EVERY CAT AND DOG.

My fur babies are all rescues; they're the best! I'm very fortunate to have them in my life. We'll definitely be purring.

I wil be purring too.. Hugs GJ xx

We will be purraying too!!!

We will be there. Hey, small world, I was also rescued as a kitten from a tree farm (Christmas tree) in South Carolina.

This is a very good reason to purr Confucius. I am so glad I found a home, I will be purring to hope that others do to!

I pray that all sweet little furries without homes find a forever home, what a perfect world this would then be.
Thank you so much for coming to my retirement send off. It meant a lot to me that you were there. It has been a pleasure getting to know you.
Love to you and your family.

Count us in! We will be there in force because ALL of us are rescues!

Forrest, our black man-cat will be in charge of our post tomorrow.

Mum has adopted 3 strays in the past and fed many in an attempt to bring them into safety - we'll be there purring as usual.

(Thanks for your get well wishes ;)

Prejudices are taught and learned. Sometimes, even without meaning to, our parents teach these prejudices and fears to their children. My mom, when she was little, never feared airplanes, but then her father was afraid of flying and somehow, one day, my mom feared flying. However, it is up to us, as adults to learn and to overcome fears and prejudices. All cats are loveable no matter what their color. Let's be kind to all. (Signed: Smokey8 fr Twitter)