Confucius Cat's treat for today: Two guests - Author Trisha Wilson and her ADORABLE fur baby. Give a warm *four paws clapping* welcome to them both.
"My baby, Snickers, is a 2 year old Chihuahua and spoiled rotten! I have had him since he was 2 months old, and I wouldn't trade him for anything in this world! He absolutely loves chicken, his favorite food. He also enjoys playing catch with his various balls, and he gets upset with me if I throw it too high where he can't catch it. So upset, in fact, that he will pout for a while before he brings it back to me, going so far as turning his back to me and laying down, holding the ball in his mouth. 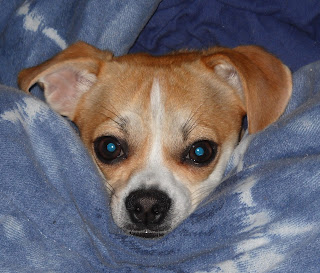 If I have been typing away at the computer for a long time, he will watch me, waiting. As soon as he sees me take my hands off the keyboard for a single second, he jumps up in my lap, usually bumping his head on the keyboard drawer on his way up, but that never seems to faze him. Once he gets in my lap, he curls up in such a way so he can lay his head on my shoulder, wanting to "cuddle". When he does that, I realize I've ignored him for too long so I take a break from writing and play with him for a bit.
Snickers always cracks me up over something... no matter how small it is. For instance, just the other day, he was going for a ride with us. My mom was sitting in the passenger seat holding him in her lap, and he got into a sneezing fit. He tried his best to get over in my lap, holding his nose up in my face, wanting me to "look up his nostrils" to find out what was causing it. He continued doing this until I finally got to a stop sign and was able to do as he wanted. Even though, I couldn't see anything, it still made him happy and he stayed on the passenger side the rest of the trip, enjoying the scenery. A few other times, when the television would be on and a Snickers candy bar commercial happened to come on. No matter what he would be doing, he would stop, walk over to the TV, cock his head to one side and stare at it. It seemed to me like he was trying to say, "I'm right here! What do you want?" He definitely knows his name, ha!
Snickers is also very protective of us, especially me. When we have company, no matter who it is, I always pick him up and hold him until they get in the door. After he calms down from the excitement, I put him down. However, a few times, if the visitor comes up to me like they're going to hug me... that's a no-no - Snickers won't have any part of that. I think in his mind, he believes they're going to hurt me. He'll start growling at them, and if they don't take the hint he'll try to snap at them. He's not going to let anyone hurt his "mommy"! :) Or, a couple of times I have been sick, and he'll go to my mom, wherever she is, and bark at her until she comes to see about me. One instance of him being protective of my mom: she can't do much but she enjoys walking to the mailbox every day & always takes him with her. One particular day, she wasn't feeling too well but she still went. She fell coming back to the house and dropped Snickers' leash. She told me that she had been afraid he would run off--it hadn't been long since we'd moved here. But, he didn't. He stayed right by her side, watching her, and trying to "help" her get up. After I found this out, I told Snickers that next time if something like that happened, he needed to come to the door and bark at me, so I can go help. He licked my nose, like he understood. Luckily though, that hasn't happened again.
That's a little about my baby. Did I mention he's spoiled rotten? :-D"

Confucius Cat says: That Snickers is an adorable bundle of personality...even if he is a canine. 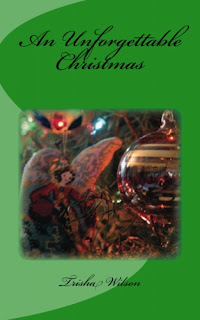 Trisha's first book release is "An Unforgettable Christmas", which is a (clean) contemporary romance. Chelsea Roberts is facing her first Christmas alone. She has her best friends, but it still isn't the same. Will an unexpected family connection bring a smile to her face again?
Nick Collins is facing the challenges of being an unexpected single father to a newborn. He has a big family, but is still lonely.Can Chelsea let someone get close enough to love her through her sadness? Will Nick be able to trust someone enough to get close to himself and Jasmine?Through a lot of tears and laughter, with the help of close friends and family, take the journey with Chelsea and Nick as they experience an unforgettable Christmas.
You can follow Trisha on Twitter @Trish73179
Trisha is also on Wattpad which is a great place to sample fiction: http://www.wattpad.com/user/TrishaWilson


It looks like a great book, especially fun in this holiday season. I hope all of Confucius Cat's friends will support the work of such a sweet animal lover.
Posted by Confucius Cat at 7:15 AM

Aw, Snickers is adorable - in looks and personality. Trisha, no wonder you're smitten! I would be, too :)

What a sweet little dog! We cats give the staff person the same treatment. At the first appearance of her not working, we voice our demands. Now I think she fakes working sometimes.

Thank you for having Snickers and myself on this blog, Patricia!!

I had to laugh when you said Snickers' favorite food is chicken--my flame-tip Siamese, Duchess, has the same affinity. I actually have to spell the word out in front of her if I'm talking about it, otherwise she starts screaming for some, LOL!

Your doggie is a cutie pie, btw! Thanks for sharing him with us.

I have to spell things for Snickers, too, or he gets all excited about what's to come. Unfortunately, though, I think he's figured out what some of those spellings mean... "O-U-T" - he'll run to the door, tail wagging. "C-O-O-K" - he'll run to the kitchen and watch for me to come in there. "B-A-T-H" - He hides LOL.

What a cute face! Snickers is a great name, too! My favorite candy bar.

I haven't eaten a Snickers candy bar since I first brought him home. :) I can't let him have an identity crisis or anything like that. Ha ha :)

LOL! I love the visual of Snickers pouting, and heading for the hills when the dreaded B A T H is mentioned. Thanks for sharing Snickers with us, Trisha.

Snickers is a hoot, that's for sure! There's never a day that goes by where he can't make me laugh about something, even on my worst days!

Thanks for stopping in & reading!

Furbabies sure make our lives fun and interesting. I know my two feline children (both older teenagers) keep me on my toes.

AN Unforgettable Christmas sounds like my kind of story. I love traditional romances that don't focus so much on sex, but I just can't get used to calling them "clean" romances. As if sex in a book somehow makes it dirty. :-)

The clean is in reference to the language, as well. So parents can be at peace if they know their teenager is reading it and won't be picking up something they shouldn't be. (Even though I'm sure they hear much worse things than I could ever add from other sources!)

I hope you enjoy reading it!!

Thanks for stopping in! :)

Snickers sounds so precious! And now I know who's peeking out at me on the computer when your avatar pops up. ;)

Yes, he's something else! And his picture is much better to stare at than my own. ;)

Thanks for stopping in!

Trisha, Snickers looks utterly adorable!
Writing can be a lonely occupation--but not with a canine or feline companion to keep you company.

Yes, you're definitely right! I don't know what I would do without him! :)

Thanks for stopping in!

Snickers sounds like he's sweet but with an attitude. lol A great character. What a cutie!