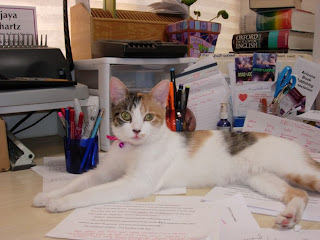 Cats have a way of invading our lives. It’s very difficult (for me at least) to have only one cat. After I adopted Jasmine (on the picture) from a no-kill shelter, I feared the poor thing would feel lonely when I leave the house. So I adopted a kitten from a friend author who’d discovered a feral litter in her yard. I thought little Spunky would make a good companion for Jasmine to play with. Of course, she hated the darn kitten at first sight. By the time the two learned to tolerate each other, here came a poor little orphan who desperately needed a home. We named him Bandit.
Now, I have three cats in the house. But when many homes in our neighborhood went into foreclosure, an increasing number of cats came to feed on our back porch, where we always keep water and dry food for the occasional thirsty or hungry visitor. The summers are hot in Phoenix Arizona, so water is critical. The newcomers liked the shade and the bushes of our large backyard, which constitute a cool jungle. They feel safe there, in the company of other cats. And so, the number of feline visitors increased... and increased... to about fifteen. 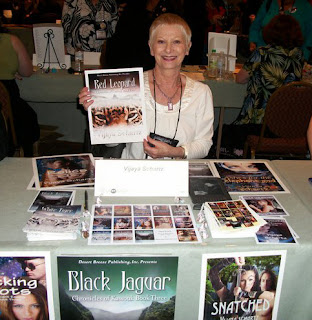 Unfortunately, most of these cats, by the time they found our backyard, were weary of people and behaved more like feral than tamed. At first, most were fixed, and some even declawed, but soon the females attracted tom cats with a very healthy libido. One of these tom cats belonged to a known and uncooperative neighbor. The feral males we couldn’t catch to have them fixed, and that was a problem... a growing problem.
The next spring we discovered three litters of new kittens almost two months old, that the mothers had carefully kept hidden in the chicken pen and in the wood pile. The mothers had taken good care of them. When these kittens showed up on our back porch, Jasmine, the queen of the house, grew very upset. She hated the little upstarts who gamboled and chased butterflies on the other side of the window. Invaders had requisitioned her backyard. We quickly found homes for the kittens, and our little sanctuary seems to have found a harmonious balance, but we keep getting new litters... so if you are looking for a cat...

Now you understand why I have cats in my stories. Sometimes they are house pets, sometimes savage man killers, even alien feline monsters. You may have noticed the covers of my CHRONICLES OF KASSOUK series, with all the feline heads. WHITE TIGER won an award for the best eBook cover of 2009. In that series, a group of humans marooned on a far away planet have grown into a society that keeps large felines as pets and train them for warfare. The books are WHITE TIGER (Book One), RED LEOPARD (Book Two), BLACK JAGUAR (Book Three), and BLUE LIONESS (Book Four). The prequel, NOAH’S ARK, the story of how it all began, is scheduled for release on April 1, 2012. Each book can be read separately, but it’s more interesting to read them in the right order. 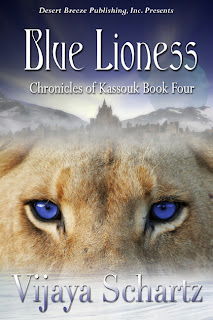 A few of these books won awards, along with their felines. The Leopard in Red Leopard won the best animal character award in 2010 for bravery and loyalty.
Here is what the latest book, is about:
BLUE LIONESS - Chronicles of Kassouk Book Four
In the face of Human slavery, Black Sword Captain Ariela of Kassouk must do the unthinkable. Rebel against the Mutant regime. But she cannot do it alone.
Ariela suspects the king’s death is no accident. And the tyrant who usurped the throne looks guilty as hell. As leader of the Human rebellion against the Mutant rulers, Ariela is desperate for help, and Lord Starro, the handsome Crown Prince of the Star Children, offers the technology the Human faction lacks. But can Ariela trust a spoiled, arrogant foreign prince who never fought a battle, and thinks he is destined to rule the universe? Is she trading one tyrant for another? No matter how kind, handsome, or fascinating, Starro has frightening mental abilities. And this alliance is not safe, especially for Ariela’s heart.
Blue Lioness REVIEWS:
"Wow! Talk about a real page turner! I absolutely Adored Blue Lioness. Ms. Schartz is an incredible storyteller with a very big imagination...The world building is so imaginative in this story that it just kept me turning the pages late into the night, because I was desperate to see what happened next and to see if Ariela and Starro were going to get their happy ending. If you love science fiction romance with stellar world building, and a beautiful love story, oh, and sentient big cats, then you do not want to miss this one. I for one am going to go out and buy the rest of the books in this series, and I encourage you to do so as well, Ms. Schartz is not to be missed!" - Coffee Time Romance
"Ms. Schartz's new book Blue Lioness is a fast paced and compelling story that held me spellbound from the start. I for one can't wait to read Noah's Ark, the next book in the Chronicles of Kassouk series." Fallen Angels Review (5 angels)
"Blue Lioness rips along at a great pace, and keeps you scrolling through pages on your e-reader, as fast as you can. Although it is part of a series, this one stands alone very well. Schartz has a very active imagination, reminiscent of JD Robb’s 2060 way of life." Manic Readers - 4½ stars
If you leave a comment, you’ll get a chance to win a pdf copy of the book of your choice in the CHRONICLES OF KASSOUK series. So please leave a comment and good luck.
*CC note: Very generous giveaway. Thank you Vijaya. The series looks fantastic! I'm going to go now and check it out!
Oh and you can find all my books in kindle, most of them in nook, and at All Romance eBooks and a few at Smashwords. Just follow the links under my signature line.
Vijaya Schartz
Blasters, Guns, Swords, Romance with a kick
http://www.vijayaschartz.com
Vijaya's books at Amazon.com:
https://www.amazon.com/author/vijayaschartz
Vijaya's eBooks at ARe:
http://www.allromanceebooks.com/storeSearch.html?searchBy=author&qString=Vijaya+Schartz
Vijaya's nooks at:
http://productsearch.barnesandnoble.com/search/results.aspx?WRD=vijaya+schartz&STORE=EBOOK&SZE=100&SRT=SA
Vijaya's books at Smashwords:
https://www.smashwords.com/books/search?query=Schartz
Posted by Confucius Cat at 6:08 AM

V, it was great hearing about your cats and your books. Good for you for adopting three. And for feeding so many.

My sister lives in Phoenix and adopted a cat that was wandering around her complex for a while. When she took it to the vet, she found out it was old (the cat didn't look old) and had diabetes. She gives Sweetie two shots a day, and she and her husband love Sweetie.

If I left food out by my house the raccoons would get it. But we have a cat we adopted from the local shelter, a dog we found from a rescue association, and we inherited a very old beagle. We figure she has to be at least 19.

Wow! 15 cats. That's quite a collection. I can see how they inspired your stories since they each have a unique personality. So which character is based on Jasmine?

Thanks for sharing, Edie.
And Linda, Jasmine doesn't have her book yet, but she is a very smart feline, and she definitely will have her character some day soon.

Vijaya, I have read the full cat series - those eyes on the covers pulled me in immediately. We didn't have pets until I was over 50 and we adopted. Our spunkiest cat, Slainte, was at a bakery when I stopped by and they were telling everyone not to give her food or water. She was very friendly, and it was going to be 110 in Fresno that afternoon so I couldn't see leaving her there. Turned out she was sick and injured, so I really could not leave her. I loaded her into the car and we went to the animal hospital and after that investment (well worth it) we took her home to get acquainted with the family. She continued to be a sweet tempered little Calico with golden eyes and lots of personality. I am writing her into my book about a Veternarian called Animal Instinct. They find their way deeply into our lives, don't they?

I love cats, Vijaya, and you've done a great job with your cats in the Kassouk series. One day I'll have a white tiger for a pet. :;

It's great to hear that you're looking after the strays. We have five at present, all former strays except one we took in from a friend of a friend who had to move and couldn't keep him. The latest to join the household is a little black lady we named Esme after Granny Weatherwax. She's an older stray we adopted through our vet, and is on fluid therapy and a prescription diet, for her failing kidneys, so we know we'll be lucky to have her for a year or two, but she's such a wonderful cat it will be worth it. We connected the moment I saw her in the "Please adopt me" cage in my vet's waiting room.

I have three, but this is about my first cat after we moved into our new house (she is no longer with us)
I volunteered to babysit for my great-niece one day. When she started fussing, Lester kept looking at me. When the baby started crying, Lester walked over and nipped me, then turned around and walked back over to my niece, and continued to do this until I went and picked her up.
I miss her.
Patricia
panthers.ravens@yahoo dot com

I adore cats! I adore books with cats featured prominently in the stories. I am glad I discovered your writing! I think it's wonderful that you are caring for so many cats in need.

Hi CC! I tagged you in a post: http://grrlysquirrelheartsgavin.blogspot.com/2012/03/more-about-me.html

This was such a wonderful post. We love cats so much and love to read about them anytime when we have. Thanks for sharing this with us. Have a wonderful day.
World of Animals