Hard to believe but we have reached week 26 of the Purrs 4 Peace Project. The half-way point. For this auspicious week I am very pleased to introduce you to a dear friend: Sir Fudge Esq. Cat. Some of you may already know him from twitter as @SirFudgeEsq where his entertaining and acerbic wit brings a smile to our faces and hearts. Not only is it apparent from his tweets that Sir Fudge and his Mam are intelligent with excellent taste in movies and music, but that they are also very aware of important social issues.

I have long known of the cruelties suffered by racing Greyhounds in the U.S., but until a couple of weeks ago, when Sir Fudge posted information on his blog, I was completely in the dark about the torment endured by the Spanish Greyhounds.

Sir Fudge has generously agreed to allow me to make this issue the subject of this week’s purrs. Even more generously, he has provided the following contribution to this post. I know you will find this as eye opening and disturbing as I did.

Hello to the readers of Confucius Cat's blog,

Confucius has kindly taken an interest in a post I submitted to my blog several days ago which discussed the plight of Spanish Greyhounds. Generously, he has allowed me some 'air time' on his blog to briefly outline the treatment of these dogs with a view to raising awareness of their suffering and hopefully, as a consequence encourage people to provide some kind of material assistance to these intelligent, gentle and physically stunning animals.

Greyhounds are used for the biennial hunting season in Spain. After each season, it is customary in certain parts of that country to hang the dogs from trees till they die. The attitude (generally speaking) toward these dogs is that they are legitimately disposable once their usefulness is exhausted. In other words, they are simply working animals of no further consequence than the extent of their usefulness

Because of this attitude, very little care is given to the conditions these dogs are kept in. They are often poorly housed (kept in underground darkness or left out in the Spanish sun) with inadequate food, water and zero comfort. These dogs have nothing.

Aside form hanging, other methods of disposing of Spanish Greyhounds include torture, starvation or abandonment. In the case of abandonment, there are not infrequent reports of limbs being deliberately broken or cut off to deter the dog from following its 'owner' home.

Unfortunately, for greyhounds which make it to, what I guess could be (in token sense only) termed a 'pound', the conditions are not much better and essentially, these poor dogs are simply waiting miserably, without the medical attention or basic comfort they need, to take their turn to die. 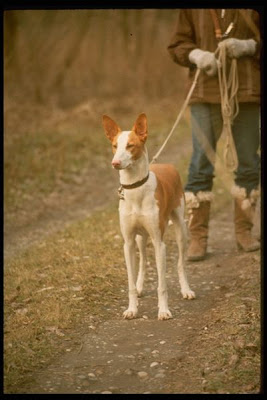 If you can stomach it, you will find further details of this sad story on my blog under "Charities, Pick Your Victim" I do want to warn you though, the language and photos you will find on my blog are altogether more confronting than you will be used to on this and many other blogs. I'm rather free with expletives.

I want to conclude by expressing my sincere thanks and admiration to Mr Confucius Cat for allowing me to publish to his blog a story that I've been following for years, and most of all, I'd like to thank you, for taking the time to read this post.

Sincerely and With Love,

The following links will provide you further information.

Facebook | Protest the Torture and Murder of Spanish Greyhounds

Week 26 of Purrs 4 Peace details are as follows:

Let us purr with for our Spanish Greyhound brethren....that they may be respected and treated with the love and care they deserve. Let us purr for understanding, purr for compassion, purr for peace.

Posted by Confucius Cat at 6:44 AM

Thanks you for bringing this to our attenshuns. I can't be at twitta Sunday but I will still be purrin for these sad doggies.

Furriends of our mom's rescues GreyHounds, but here in the USA. It's such a shame to do that to animals. Animals give nothing but unconditional love, and it's sad that they do that even when they're abused. Mom would like to go visit that, but it will make her sick to her stomach AND VERY pissed off. We will be purraying for all mistreated animals!

This is horrible! I just can't understand how humans can be so cruel and heartless! It just makes me sick to think of this. I will certainly pray for these poor dogs and for all abused animals in the world.

Wouldn't miss it for the world!!!

I couldn't even finish reading the article. My God, I hope they pay for this!
cindy

Our eyes are leaking at the awful lives these poor doggies endure. We wish we could bring them all here to live with us and lavish love and attention on them. Poor doggies. Alas all we can do is purr for them, but we will be purring with 100% of our heart and in the company of some of the most kindhearted and gentle souls we know. ~S,S,C & F

I can't imagine someone treating doggies--or any animal--in such a heartless manner. The little Purring Machines will be activated for mega-purrs on Sunday.

I am so sad about this cruel treatment of the Spanish Greyhounds and I will be purring to help stop this!
your friend,
Bruce the cat

Fiona and I will be purring today.