Happy New Year! The first Cat Treat of the year is a wonderful author, Marie Higgins and and her adorable fur baby called Jack. Here's Marie: 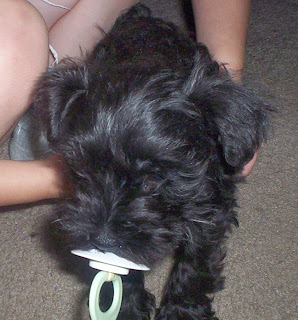 "There wasn't a time in my life that I can't remember having a pet. When I was young, my parents got a cat. Within a few months we realized I'm allergic to their hair. Not long after that, we adopted a dog. They are so much fun for kids, in my opinion. When I grew up, married, and had my own family, we always had a pet. The dogs we had that lasted longer than the others were: Cocker Spaniel (my favorite), and Teacup Poodle. Cindy - our Cocker, must have had some kind of brain tumor and she died in our house. That was so sad. And Buddy - our Poodle - had seizures since he was small, but he still lasted for many years until he went blind and could hardly walk. We had him put down, and that was very hard on the family, too.
By this time, my kids were growing up and moving out. My husband and I worked full time and we didn't have time to raise another pup - so we thought. We went two years before my husband said he just HAD to get another dog. I let him pick one out, so he did. A Miniature Schnauzer he called Jack. (don't know why he named him that...) 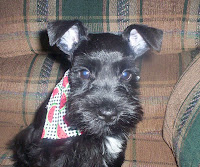 Jack was such a cute puppy, it was hard not to love him. My grandchildren fell madly in love with him and cuddled him every time they came over. Now Jack is very protective of them, and doesn't like them to have friends over because Jack is worried they will get hurt. Jack is also very protective of my husband - and yes, even me. When I play and act like I'm growling at my husband, Jack gets upset and barks at me. lol 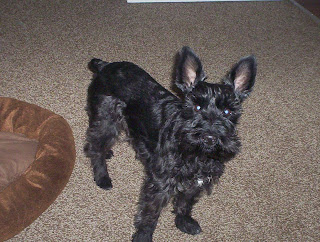 Jack was such an easy dog to train, too. He doesn't dig in the yard, he goes to the bathroom outside, and he rarely every chews on my shoes. :)  I taught him how to sit up and roll over. I wanted to teach him how to bark for a treat, but he does enough barking as it is when company comes over so I didn't want him barking anymore.
Although he's a great dog, we still have to stick him in the bedroom when company comes to visit. I'm afraid he'll bite them. If anyone could tell me what I can do to train him not to attack visitors, I'd greatly appreciate it! 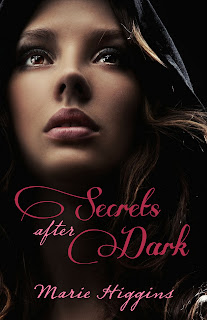 In my newest release, "Secrets After Dark" I've written about a dog. Well...a werewolf, actually, but I made him different than other werewolves I've read about. Here is a little excerpt of the story -"
Hannah clasped her hands to the material around her neck, bringing the garment closer together to ward off the coldness seeping in through her skin. With every step, she searched through the fog and strained to hear what was going on around her. Close by, bushes rustled and twigs snapped.
She glanced at the trees, wondering if she should climb one to get out of the path of the wild animal. Hannah gulped. Another twig snapped, and the growl of an animal rumbled through the air. She froze in fear, afraid to even breathe.
Through the fog, yellow eyes floated toward her, and within seconds the outline of the wolf appeared. He bared his teeth as he stared at her, stalking closer.
Hannah whimpered. “Please, don’t.”
The animal stopped and tilted his head, no longer threatening her with his nasty snarl. His eyes blinked. Against her ribs her heartbeat thundered, shaking her body even worse. Would he pounce on her and kill her immediately?
This was definitely the calm before the storm.
Even through her fear, she realized she’d never seen a more beautiful animal. Pure white fur covered the animal, and perfect ears stood straight on top his head. The long, bushy tail did not move at the animal stared at her.
Several minutes passed. She dared not move for fear of provoking the animal further. If the rapid speed of her heart didn’t kill her, the wolf certainly would. Silently, she prayed Morgan would save her as he did the last time. But as each minute passed, her hopes sank lower.
Finally the white wolf moved, taking a step closer to her. Clutching her shaking hands against her chest, Hannah squeezed her eyes closed and whimpered. The heat of his breath fanned her cold hands. She waited for his sharp teeth to sink into her skin, but instead she felt soft fur rubbing gently against her hand.
She peeked at the wolf, keeping as still as she could. He looked up at her, his large, yellow eyes staring wondrously into her eyes for a moment. Then he whined and nudged her with his nose before rubbing his head on her hand again.
The beast seemed friendly, but how could that be? Hadn’t he already killed women, including Sarah, the Thorntons’ servant?
The wolf sat in front of her and lifted his paw. Letting out a whine, he rested his paw on Hannah’s leg. Her heart leapt in terror. She had heard once that some animals play with their victims before they kill them, and perhaps this was the case now.
Keeping his eyes on her, the wolf touched her again. He let out a soft whine and tilted his head at her.
Hannah licked her lips. “Wh–what do you want?” she whispered.
The wolf rose to all fours and stepped in front of her as if he was leaving. He took a couple of steps then turned and looked back at her. He whined once more before turning and taking a few more steps, then stopping again to peer back at her, his eyes glowing.
Perhaps all the rumors of the white wolf had been false. Obviously, the animal wasn’t trying to hurt her, but help her. Hannah clasped her cold, shaky hands and walked toward him on quaky limbs. She kept a few steps behind him as he led her through the trees. Every so often, he turned and looked at her as if to make certain she followed.
Soon, the lights from the manor shone through the night like a beacon in the fog. Tears gathered in her eyes. At last she was safe!
Check out book trailers for "Secrets After Dark" -
http://youtu.be/w_XZYbKQ8VU
http://youtu.be/rel71riDBnE

I can't believe you lasted 2 years without a pet! I'm glad you have Jack; he's so cute! I love werewolf books and will definitely add yours to my TBR pile.

M's heart just melted cuz she LOVES schnauzers. She used to have one many years ago before me, and she really loved that doggie.

Thanks everyone! I'm so happy to be a guest at this blog - since I love animals. :) I hope to hear if anyone can help me keep Jack from biting people. He's very protective, and I don't want to keep locking him in the bedroom whenever we have people come to see us. :( Help???

What a cutie! And I'm dying to read the book:-)

Love that you grew up with dogs and how great that you incorporate your love of animals into your writing. Your books sounds great.

Jack sounds like a lovely dog. Now if only our puppy would follow his wonderful example of not chewing and digging!

I enjoyed your excerpt. I'm a sucker for werewolf stories. :)

I was the one who couldn't stand not having a dog in the house after our last dog passed. We have 2 dogs now and 1 cat. I love them all. They're my company during the day.

Love the white wolf! What a great character!

A new book! Can't wait to pick this one up.