What a fantastic cat treat I have for you today: Author Norah Wilson and her dogs Bandy and Chloe. I bet you'll be inspired by the story of these sweet dogs and their very special owner. Now, without further ado, here's Norah.
Big paw prints to fill
"I got Bandy immediately after my yellow lab Zack died. My kids’ young hearts were broken. Knowing the only remedy was to bring a new dog into our lives, we headed to the local SPCA. Going into this adoption, I already felt sorry for the new dog. How could it ever measure up to Zack, the most good-tempered, gentle, friendly dog in the world? 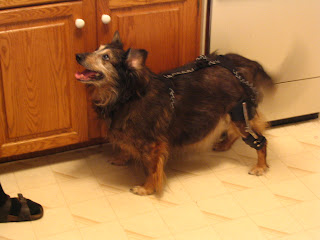 Well, we got to the SPCA and there were cute little dogs. There were handsome big dogs. And there was one very odd-looking mid-sized model. It had the height and some characteristics of a Sheltie, but it was quite … um, rotund. Short-legged, it had a glorious, multi-colored hair coat that brushed the floor. He was missing several front teeth, probably from having been kicked (he’d been seized from his former owner) and staff estimated his age at 5 years. It was love at first sight for my daughter, if not for me. We leashed him and took him outside. The first thing he did was cock his leg and piddle on something, which my kids found delightful. (Zack, despite being a male, always squatted politely; clearly, he’d had no male role models in his puppyhood!) Then this funny little dog bounded up onto a picnic table. That sealed it, since that was something Zack loved to do.

So, home we went with this dog, which the kids named Bandicoot (or Bandy for short). As the dog’s foibles became known to us, all I could do was shake my head and say, “He’s no Zack.” If I tried to jog, he bit my ankles. If the kids went sliding, he barrelled down the hill and bowled them off the toboggan. If the kids engaged in any kind of horseplay, he leapt in to break it up (usually biting the one that was shrieking the loudest, i.e., the victim). If my husband touched me, Bandy would go for his ankles. And he really didn’t like people with canes. I suspect he’d probably been beaten with something similar.  (Whatever the source of his hostility, I’m here to tell you it’s embarrassing when your dog menaces octogenarians.)
But slowly, Bandy grew on us. While he was very close to my kids and fretted over their safety, he bonded primarily with me, the one who saw to his needs. Soon he became my shadow. I couldn’t move from one room to another without him padding after me.  I wrote most of my books with him lying at my feet. And he was so incredibly loyal and protective. Even at the end, at the age of 16 – virtually toothless, nearly deaf and almost totally blind, his glorious hair coat reduced to mere wisps – he would have defended me to the death against any threat. When I finally had to euthanize him, it wrecked me. That was over four years ago, but I’m crying as I write this. Much as I’d loved Zack, Bandy was my heart.
Of course, in the midst of our grief, we went to the SPCA again. This time, we came away with a hulking adult female Rotti-Lab cross named Chloe. Of course, I was soon muttering, “She’s no Bandy.“  Unlike my fearless Bandy, Chloe is terrified of her shadow. At the first sign of a threat, she slips her collar and runs home! Of course, I realize that she, as another rescued animal, has had her own troubled history that made her so fearful. She’s also funny, goofy and no matter how old she gets, she’ll always be a puppy at heart. I expect when I get my next dog, I’ll be saying, “She’s no Chloe.”
Bandy may be gone, but he’ll never be forgotten. I ensured that by inserting him into my Golden Heart finalling GUARDING SUZANNAH. All his idiosyncrasies are on display and are not embellished in the least. That’s one of the reasons that book will always be a favorite of mine.
Norah Wilson lives in Fredericton, New Brunswick, Canada with her husband and two adult children, Chloe, and numerous rats (the pet kind). She has been writing romance a long while, and has finalled multiple times in the Romance Writers of America's Golden Heart contest. She also won Dorchester Publishing's New Voice in Romance contest in 2003. Norah also writes paranormal YA stories with writing partner Heather Doherty, under the name Wilson Doherty. She and Heather also write the hilarious Dix Dodd mysteries under the name N.L. Wilson.


I knew Norah was an awesome multi-published author but now I know she's a wonderful and compassionate human to open her home to these sweet animals. Bravo.
Guarding Suzannah is available at all the usual outlets including Amazon.com Permalink: http://amzn.com/B003ZK5KS4

Criminal defense attorney Suzannah Phelps is the bane of the Fredericton police department (they call her She-Rex for her habit of shredding cops in the witness box). She is currently being stalked, but is reluctant to report it to the police, whom she half suspects of being the perpetrators. But when Detective John (Quigg) Quigley learns of it, he's determined to protect her, at considerable risk to his career. They've struck sparks off each other in the courtroom, and he's burning to do the same in the bedroom. When the danger escalates, he has the perfect excuse to pose as her boyfriend, but the closer they get, the more the lines between pretense and reality blur.
I hope you'll look for Guarding Suzannah and Norah's other titles. You can connect with Norah on Twitter (@Norah_Wilson) and on Goodreads
http://www.goodreads.com/author/show/1361508.Norah_Wilson
Posted by Confucius Cat at 6:43 AM

Very nice post today. Loved hearing about the animals saved from the shelters.

Loved the stories about your dogs. And every book needs a dog, at least I think so.

Thx, Max. I wouldn't consider going anywhere else for a pet. But I have to say, my contribution is small compared to some. I have a friend in New Mexico who fosters rescued dachshunds (author Alice Duncan). Now she's a hero in my eyes.

Maggie, I couldn't agree more. I love it when an animal is incorporated into a book. You can tell a lot about the characters by how they interact with them. :)

I love your big heart for rescue dogs, Norah! What a wonderful gang of dogs you've saved and loved. Your book sounds great--can't wait to add it to my list!

Oh, I know too well how animals can totally capture our hearts. We bought our loveable black cat home from the SPCA and I can't think of a better animal for our family. So happy to hear about Bandy - and now Chloe.

Norah, I got a few tears reading about Bandy. He was a great old dog. Romeo,my old German Shepard, is a character in the book I'm currently writing!

Thanks for making me cry first thing this morning. I have horses and dogs that do this to me. Just found some old pics of a Dalmatian we rescued, and I cried then too. Not sure I'll be able to take it when my Maltese passes. She's 11 and blind, and I'm just waiting for her teeth to fall out. Dogs are amazing, and you are right, there will never be 2 that are the same.

Thanks, Christy! We've been rescuing dogs for years, and I've got the pet album to prove it (my kids used to call it the dead pet book).Bertha, Damon and Cissie each have a place of honor, along with some doggie "cousins", as well as a plethora of rats.

Thanks, Linda. You do indeed have an amazing rescue cat. (It enjoys sailing!)

Oh, don't get me started, Kate! I cried as I wrote that. And I remember your beautiful Romeo. So glad he got a place in your book. Tell me, can the fictional Romeo flatten car tires with his bite? :)

Sorry, Jamie! I know what a big heart you have for your animals. I don't know how on earth you survive the loss of a horse. Dogs and cats are heartbreaking enough. Oh, but the joy they bring us. It's more than a fair trade.

As for no teeth, I can tell you they can manage very well. The vets felt they couldn't do anything with Bandy's deteriorating teeth because they didn't think he'd survive dental surgery. But when it looked like he might die from a tooth bleed, I decided I'd rather risk him dying on the operating table. He came through it, and was the world's unhappiest dog for a few days, but he never looked back after that. He ate the homemade food I made him with great gusto and enjoyed much better health for his last years.

Hi Norah, Sniff, sniff, I've just got a little shepard( Shennia) that we are looking after for a month; she's at my feet and wondering why I'm sniffing. I told her I was reading your post. Our large sheppard (Deeva)5 yrs old has her nose out of joint even with having 8 year old(Shennia) visiting each winter. When I was reading your post I knew that Bandy was in your novel, Guarding Suzannah. I loved the novel!Thanks for the post, Doris

Thank you, Doris! I knew you'd recognize Bandy. :)
You are such a good soul to take in another dog. We occasionally take in a little Maltese and you should see it dominate my 100 pound Rotti-Lab cross. :)

Lovely blog. Having met Bandi, I can attest to his testiness, but he always allowed me to pet him.
Thank you, Norah!

That was so sweet and sad! I'm glad Bandi gets to live on and let others love him.

How nice it is to get to know Norah better and meet her wonderful animals at the same time.

Thanks, Barbara! He used to growl at my father-in-law. It didn't help that George (FIL) growled back. :)

Thank you, Linda. Yes, the memories are very bittersweet. I mourned an awfully long time. Actually, until I had a lovely dream when he came to me all young, pain-free and feisty again. That's how I like to think of him. :)

Thank you, Mariodacatsmom. That's why I love this blog. There's something very ... bonding about sharing our animal stories. Recently I joined a new loop, and I notice every author when introducing themselves spoke about their pets, which I thought was really neat.

Norah, your post made me weepy. I know how special Bandi was to you. I'm so glad he lives on forever in Guarding Suzannah. Great book, BTW, really enjoyed it. Thanks for such a touching post.

Thanks, Bonnie. I know what heartbreak you've been through with losing your precious fur baby, too. (Folks, Bonnie has the sweetest pair of Shih Tzus, one of which is a rescue.)